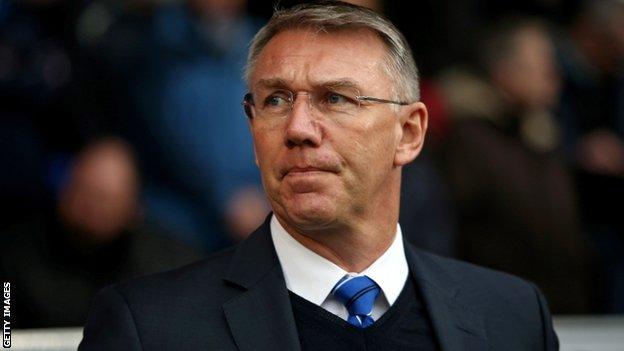 Yeovil Town's Championship survival hopes were boosted as they held Reading to a draw despite having three players red-carded in the second half.

Shane Duffy headed Yeovil ahead before Byron Webster was sent off for pulling back Royston Drenthe for a penalty, but Adam Le Fondre's spot-kick was saved.

Reading levelled in the aftermath as John Lundstram put through his own net.

Joe Ralls saw red for felling Garath McCleary and Kieffer Moore went for a second booking but the Glovers held on.

Yeovil have won only two of their last 16 away games in all competitions, losing 10

The draw moved Yeovil off the bottom of the table on goal difference, following Barnsley's 5-0 defeat at Huddersfield.

Reading have dropped out of the play-off places, replaced by Wigan, after being left frustrated by a determined Somerset side.

The Royals went into the match having lost their two previous home games without scoring a goal, and will know Saturday's draw was a missed opportunity to return to winning ways.

Yeovil, now unbeaten in four matches, started well and were ahead on 20 minutes when Duffy headed into the net after Reading goalkeeper Alex McCarthy missed Luke Ayling's cross.

Pavel Pogrebnyak had a headed effort disallowed for offside for the hosts before the break, but Reading drew level after Webster was sent off for hauling back substitute Drenthe as he bore down on goal.

Le Fondre's resulting penalty was saved by Marek Stech but the hosts equalised from the ensuing goalmouth scramble when Lundstram's attempted clearance went over the line off the back of the grounded goalkeeper.

Yeovil were reduced to nine men soon after when midfielder Ralls was given his marching orders for a scything challenge on McCleary, and they were down to eight in the 88th minute after Moore's second yellow card, a foul on Chris Gunter.

"We started the game very well but yet again conceded a poor goal and gave our opponents something to cling on to.

"Then we just started lumping the ball forward.

"When they were down to eight, we got in a lot of crosses and created a lot of chances. We only got one point, when we should have had three, but credit to Yeovil. We've got to pick ourselves up and go again. We're still in the mix."

"I've no complaints on the day. The sendings off were not for viciousness.

"The first one Webster was just misjudgement and the second and third were two young lads who were a bit overzealous in the tackle. If you do that, you're going to get a red card.

"It's a lesson learnt for all three of them. They put their team in trouble but they didn't mean to. It was more a question of mis-timing.

"With only eight players, I was very proud of the way we defended. There is a passion among all the players and they want to do all they can to keep Yeovil Town in the Championship. We'd like to stay there as long as we can and if we survive, it will be the club's biggest ever achievement."