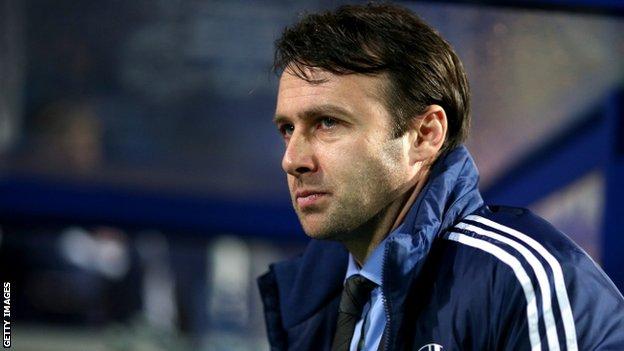 Bolton Wanderers scored twice in each half to end Blackburn's five-match unbeaten run and move nine points clear of the Championship relegation zone.

Return to form for Bolton

Bolton's 2-0 home win against Watford on 22 February was their first win in nine games in all competitions, and first in the Championship since Boxing Day

Blackburn, without injured captain and central defender Grant Hanley, were looking for a second successive win to boost their hopes of finishing in the play-off positions - which they now trail by six points.

But it was the Trotters who took the early initiative as Kamara stooped low to head into the bottom corner after a neat combination between Lukas Jutkiewicz and Danns.

Dougie Freedman's side, who had only won three of their 16 home games in the Championship this season, were looking to move further away from the bottom three and took firm control just before the break.

Danns's volley was blocked and Mason - who had missed a good chance a few minutes earlier - scooped home.

Bolton were further in control soon after the restart as Spearing's shot from outside the penalty area bounced off the bar before crossing the line, and substitute Moritz completed the scoring from 20 yards.

"I think we deserved more but I was really pleased with our intent today. I can't sit here and praise one particular player because everyone played well.

"I think the fans deserve the credit today, though, because they've not had a lot to shout about this season and they pay good money.

"Blackburn are a good, decent team so don't be fooled by the result today. There was one little slip from us in the first half but apart from that it was some really good stuff that we played out there.

"It could have been more but I'll settle for 4-0. And, like I said, that was for the fans today."

"But we're disappointed with the manner of the goals we've conceded, to be honest. It was out of the blue from the standards that we've set ourselves this season.

"Our results have been decent but it's a local derby and I did not think we displayed enough passion.

"We're also disappointed with the timings of the goals we've conceded. It was not acceptable from us."