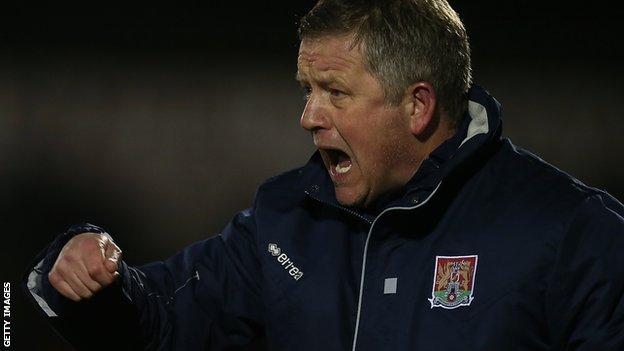 Northampton Town shared the points with Bristol Rovers in a tense game against their fellow League Two strugglers.

Northampton, who had won three of their last four games, looked the likelier scorers in a quiet first half, with the pace of Emile Sinclair the main threat.

But clear chances remained rare, although both goalkeepers were forced into good saves in the closing stages.

The Cobblers are four points off safety, while the visitors are six points clear of the relegation zone.

"I think the players have given me, the staff, the club and most importantly the supporters everything in the last three games.

"We could have won it, we could also have lost it. Matt Duke has made an unbelievable save and on the basis of the game maybe the draw is a fair result.

"On current form we're one of the top sides in the division, we can be pleased with our performance this afternoon and it has been an encouraging week."

"In the second half it opened up a little bit so the second period was [like it was] because we were both trying to win it.

"That's key to what happened the first half, it seemed like we both were trying not to concede the first goal which was a bit dull.

"But it was 0-0 and people think that's not a lot but it's been a big week we've just played three form teams in our week and two of them away from home so I've got to be satisfied with an unbeaten haul and a few more points on the total."