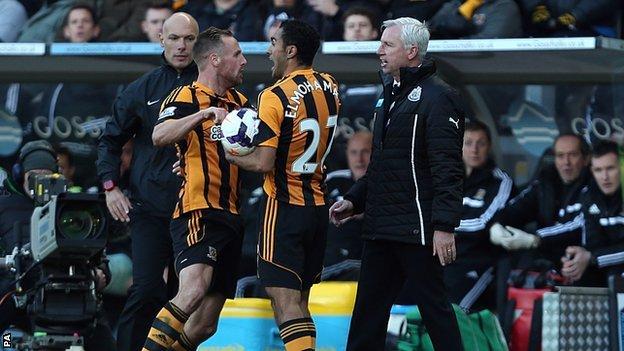 Pardew clashed with Meyler after the City midfielder collided with him in an attempt to retrieve the ball to take a throw-in.

Curtis Davies's header got Hull back in it, but Sissoko tapped in a rebound and Vurnon Anita did likewise to seal it.

Newcastle had gone four games and four goals without a win before last week's 1-0 victory over Aston Villa, but this second consecutive success was overshadowed by the actions of their manager.

With his side 3-1 up and in control, Pardew, who was banned for two matches in 2012 for pushing an assistant referee, was angered when Meyler shoved past him in his bid to gather the ball.

The pair came together, with Pardew pushing his head into the face of the Tigers player. A melee followed and, after the crowd was dispersed, Meyler was booked and Pardew dismissed.

That the stupidity of their manager - who later apologised - will take the headlines is harsh on a Newcastle side that capitalised on the errors and profligacy of their hosts to earn a first league win over Hull for 24 years.

Robbie Savage: Couldn't believe my eyes when I seen [sic] Pardew throw his head into Meyler, absolutely disgraceful behaviour from a manager.

Joey Barton: Seen Pardew incident. As per usual. Massively over-hyped. Don't let a couple of stupid incidents detract from the job he has done at Newcastle. Especially with what goes on behind the scenes there.

Hull, who are now without a victory in their past four home league games, actually had the better chances of an open first half, but went to the break two goals behind thanks to a combination of wasted chances and defensive mistakes.

After Newcastle goalkeeper Tim Krul pulled off a brilliant double save to deny Alex Bruce - first from a header, then on the line from the follow-up - the visitors immediately went up the other end to open the scoring.

The excellent Cheick Tiote sprayed the ball cross-field to Remy, who was able to feed the overlapping Mathieu Debuchy. A cut-back from the byeline was met by Sissoko's strike high to Allan McGregor's left.

Hull had previously tried in vain to pierce the Newcastle defence with balls from the deep, but, on going behind, they began to look more potent.

Nikica Jelavic and Ahmed Elmohamady both failed to find the target with headers from close range, while Jelavic struck the bar with a free-kick.

But, with those chances gone, Hull fell further behind thanks to Figueroa's mistake. A back-pass from the halfway line had nowhere near enough power to reach McGregor, who rushed out of his area only for Remy to push the ball past him and finish into an empty net.

Hull were able to respond immediately after the break, Davies flicking in as Krul rashly attempted to claim Tom Huddlestone's free-kick through a crowd of players.

Given the nature of the first half, it seemed as though Hull were primed to continue the fightback, but, instead, another home mistake followed.

A poorly-worked free-kick on the halfway line allowed Newcastle to break, with Yoan Gouffran's shot parried into the path of Sissoko for a simple second.

With the contest effectively over, Pardew provided the main drama then watched from the stand as Anita finished at the back post after McGregor pushed Paul Dummett's effort into his path.