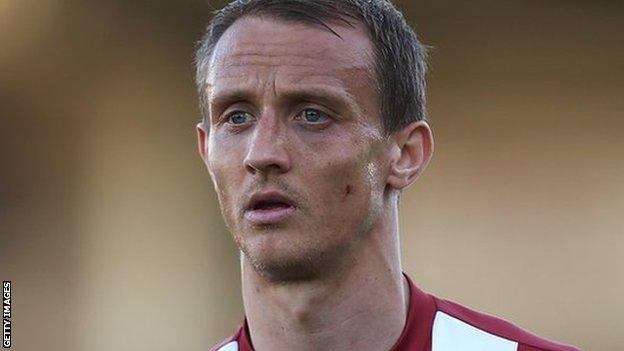 Luton Town kept their lead at the top of the Conference Premier table with a stylish victory over play off-chasing Alfreton Town.

Luke Guttridge fired Luton ahead from 12 yards midway through the first half after his initial shot was blocked.

It was 2-0 soon after when Scott Griffiths crossed for Andre Gray to tap in his 25th goal of the season.

Alfreton could not find a response and were punished when Paul Benson fired home from close range late on.

The win means Luton stay 14 points clear at the top of the table whilst Alfreton stay in fourth.

The Hatters have now scored 20 goals and kept clean sheets in their last four games.

"They worked their socks off to frustrate us, but to be honest they didn't frustrate us. We just kept going, we waited for an opening and scored a goal. From that minute on I'm not sure I felt we'd get beaten then.

"It was a hard, difficult game where we had to dig in and grind out a result. And that's the pleasing thing for me, because when we play open and free we've shown we can score and win, but we've also shown away at Macclesfield we can battle and grind one out.

"It's great when you win and score lots of goals. I feel like we're almost doing ourselves an injustice by saying we only scored three. We scored three, that's fantastic.

"They man marked him [Luke Gutteridge] so we kept switching him and I think by doing that that helped him create a little bit of space arriving into an area where the marker doesn't know where he's going to be. I was pleased with that tactically and once we scored I felt they would have to push another person forward to get back in the game."