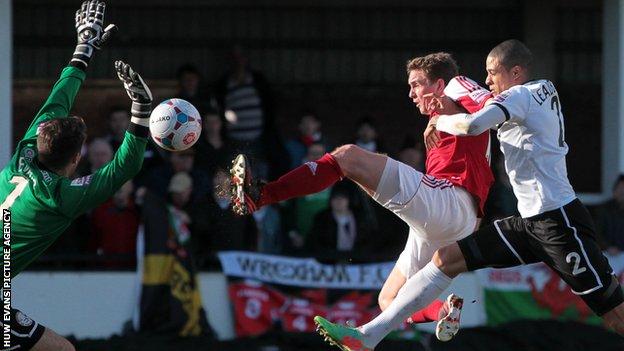 Wrexham ended a difficult week with a win which condemned troubled Hereford United to a fifth straight defeat.

Johnny Hunt pounced on Joe Clarke's cross to stab home from six yards into the roof of the net for the opening goal after nine minutes.

The visitors never looked like losing against a Hereford side that barely troubled keeper Andy Coughlin.

Wrexham's first victory in six games came at the end of a week in which they parted company with manager Andy Morrell, then lost 5-0 at leaders Luton.

The Bulls remain six points clear of the relegation zone, with 12 games of the season to go.

"We started quite well but, one cross, back of the net and then the confidence seemed to drain out of the players. Obviously, a lot of them haven't played much football and don't know how to handle it. I wish I had a few more Luke Grahams and Don Collins.

"All we can do is encourage and work with the nine fit players we've got for next week. There's two with bad injuries. So we go to Braintree with exactly what we've got.

"When Sam Smith came on, they are all booing which I think is totally unacceptable because they need some encouragement. It's a difficult time for everybody around this club. But they can vent it at me, because I'm picking up all the rubbish as usual."

"It means everything because it's the end of four or five hard days that we've had since the Luton defeat and the lads deserve it.

"They've worked so well Thursday and Friday. I thought in the first half we were absolutely magnificent and their keeper's made some good saves.

"The second half was just a solid, professional performance. We gave nothing away and we thoroughly deserved the win."