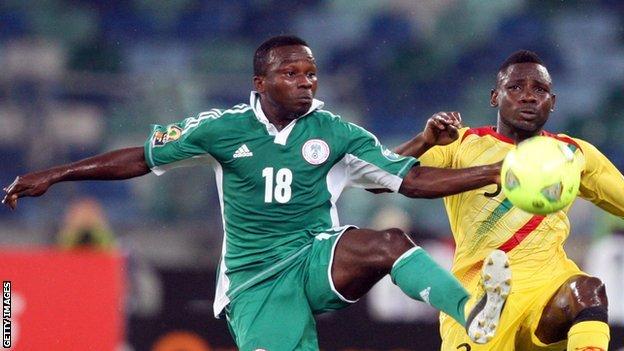 The 24-year-old emerged as the Most Valuable Player at the recent 2014 African Nations Championship (CHAN) in South Africa.

He has signed a four-year deal with The Brazilians from Enugu Rangers in Nigeria.

Uzoenyi is to be loaned straight back to Enugu Rangers, before linking up with the Tshwane side in June.

"Joining a club like Sundowns is a great deal for me because their ambitions to conquer Africa are in line with my career objectives as a player," he told the club's official website.

"The other thing that made me join the club is that Coach Pitso had a chat with me before I joined and we had a discussion about his plans for me.

"I feel that I'm ready for the challenge."

A member of the Super Eagles squad that won the 2013 African Cup of Nations in South Africa last year, Uzoenyi's career has witnessed a renaissance.

Keen to prove himself in Europe, the player opted for a loan move to French side Rennes last season.

But the left winger could not break into the squad and was unable to tie down a permanent deal at Rennes at the end of a torrid six months.

Loss of form and injury cost him a place in the national team and he was overlooked by coach Stephen Keshi during the 2014 World Cup qualifiers last year.

His career took a positive twist at the CHAN where his four goals and performance helped debutants Nigeria finish in third place in South Africa.

"It has been a tough period in my career but finally I have a reason to smile again," he told BBC Sport.

"I never stopped believing in myself, the coach gave me another chance and I didn't disappoint because God was on my side."