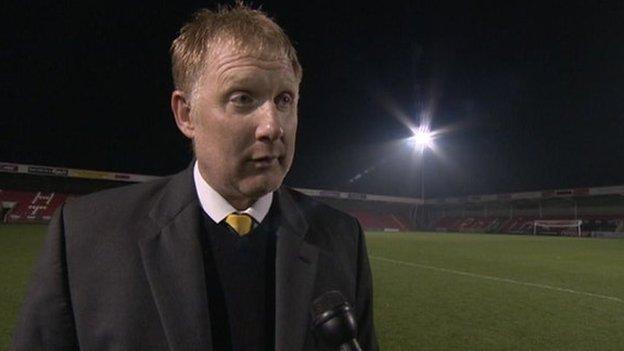 The 46-year-old was dismissed after Saturday's 1-1 draw with North Ferriby, who started the day top of the Conference North table.

The result left Gloucester second from bottom in the standings, seven points from safety, and without a win since 28 December.

Assistant Matt Rose, who was appointed last month, will take charge of first-team affairs on a temporary basis.

In the year he was appointed, 2007, the Tigers' ground was badly damaged after flooding in the area and the club have since played away at Cirencester, Forest Green Rovers and currently Cheltenham Town.

"It was a collective decision and it wasn't an easy one," chairman Stuart Pike told BBC Gloucestershire.

"Dave has been a servant to the club but I think he would admit he's felt tired in the last few months.

"We felt we needed a change and made that decision."

Mehew, a former Bristol Rovers striker, was promoted from Tigers assistant to manager in 2007 and led them to promotion from the Southern League two years later.

They have also reached the first round proper of the FA Cup for the past two seasons.

The club are without a permanent ground, after their Meadow Park home was ruined by flooding six years ago, and are currently renting at Cheltenham Town.

Their spell away from home has resulted in financial problems and last season, the playing and backroom staff deferred part of their wages to help the club stay afloat.