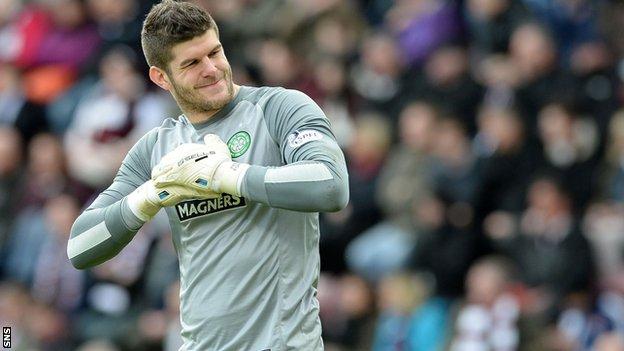 Celtic goalkeeper Fraser Forster refused to take all the credit after breaking the Scottish league record for minutes without conceding a goal.

The Englishman claimed a 13th consecutive Scottish Premiership shut-out in over Hearts.

And Forster, who has not lost a goal in 1,215 minutes of league football, broke former Aberdeen keeper Bobby Clark's 43-year-old record.

What a record and he's a fantastic goalkeeper. I'm very proud, we've broken a record

"First and foremost it was about getting the three points. As a team, it was a really good performance.

"The clean sheet's a real bonus and I'm delighted to have kept it. Massive credit to everyone, everyone's played a part."

"He came out and just said, 'congratulations'. He was obviously very proud of his record. Real credit to him, being so kind and so complimentary about me."

Manager Neil Lennon was also delighted for Forster as well as Leigh Griffiths, who netted his first Celtic goal at Tynecastle. Teemu Pukki scored the second, with Lennon's men still unbeaten in the Premiership this season.

"What a record and he's a fantastic goalkeeper," Lennon told BBC Radio Scotland.

"I'm sure he was a bit nervous going into the game, that would've been preying on his mind. Now he can concentrate on hopefully going further with the record.

"I'm sure he'll be the first to agree that the lads in front of him have done fantastically well as well.

"I'm very proud, we've broken a record. It's 43 years in the making and it's 43 years for a reason - it's a very difficult thing to do so it's been a great day for the club.

"It took a special goal from Leigh to get us off the mark. I felt that's what we deserved out of the game.

"He showed great composure and it's a brilliant finish. That's him off the mark in his Celtic career and that's absolutely what we're looking for from him.

"It means a lot to him. I hope that's the first of many from him.

"We would like to go as long as possible unbeaten but that's going to be very difficult."