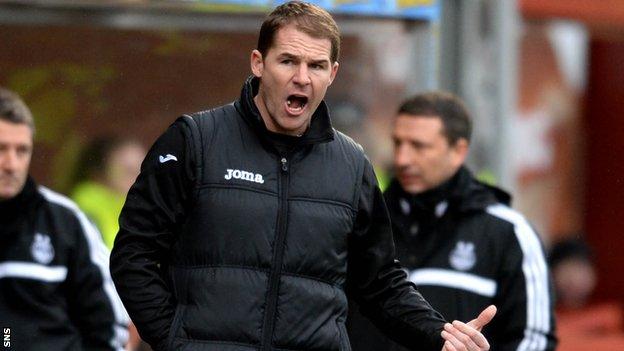 Partick Thistle manager Alan Archibald insisted it was only a matter of time before his players recorded their first home league win of the season.

"It feels very good," said Archibald. "It's been a long time coming.

"I'm delighted for everyone associated with the club that we got the monkey off our back and got a good result."

Thistle were in command for much of the match, but it was almost an hour before Balatoni's opener, which was followed by two Taylor strikes in-between an Adam Rooney header for the Dons.

There's no question that whatever happens this season, Alan Archibald will be our manager next season

Archibald said it took a while for the players to realise they could pick apart the Aberdeen defence, but when the goals started arriving in the second half, it gave the squad confidence to progress.

"In the first half we were poor and didn't show enough belief, but the second half was more like us," said Archibald.

"We put a very good performance in when we showed the belief that we could go and hurt them.

"It's been a team effort, I thought the whole team performance was fantastic.

"The players showed enough belief, they kept their shape and it looked like we could pick Aberdeen off on the break."

Before the match at Firhill, Thistle chairman David Beattie had admitted the run without a home win had played on the minds of the club's manager, players and board.

However, he voiced his support for Archibald and insisted he would still be in charge at the end of the season.

"It's not a pleasant position not to have a home win, it's not pleasant for players, fans or the manager," said Beattie.

"It's usually the chairman saying he has the backing of the board, then the manager goes away - but he absolutely does - there's no question that whatever happens this season, Alan Archibald will be our manager next season.

"I think Alan is one of the hardest working mangers in the league.

"It's his first season as a Premiership manager. He's learned a lot and it's a learning curve for the whole club.

"I'm sure the fans will support him as much as me and the board do."