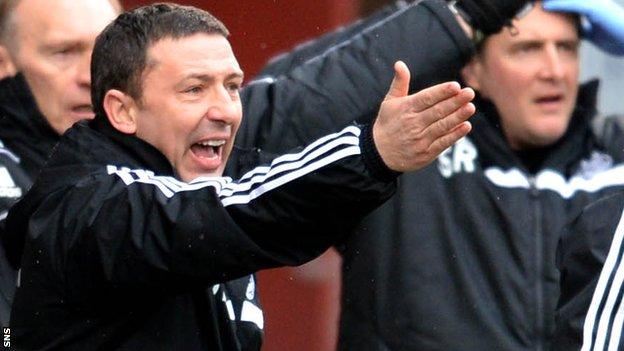 Aberdeen manager Derek McInnes insists his players will bounce back from at Firhill.

The win was Thistle's first at home in the league this term, but McInnes said he will judge performances at the end of the season.

"That's the challenge ahead of us," said McInnes. "The season doesn't finish now.

"There's no panic about it, there's got to be a realisation that we've got to be better than that to win games."

Barry Robson missed a penalty early in the first half after Jags keeper Paul Gallacher had felled Adam Rooney in the box.

It's how we react to it, and these boys have always shown that response - and I'm confident we'll get that again

Aberdeen were never in the lead, after Conrad Balatoni's second-half strike for Thistle was followed by two goals from Lyle Taylor, one either side of a Rooney header.

McInnes said his players need to react better after conceding a goal, but he believes they will provide a response as the season progresses.

"The better side in the last half-hour won," said McInnes. "Thistle, once they got themselves in front, started to play with a lot of confidence and desire to get over the line.

"A first home win has been a long time coming and they deserve a lot of credit for that.

"I actually felt we didn't react well to going a goal behind. I felt we needed to get back in the game, to show a bit more maturity to keep knocking on the door. We did create chances and we were the far better team in the first half.

"We missed a chance with Barry's penalty, and we had a couple of opportunities after that.

"Our need to get back in the game was frantic at times and we became a bit disjointed. Thistle took advantage of that and they scored some good goals from their point of view.

"It's how we react to it, and these boys have always shown that response - and I'm confident we'll get that again.

"It's important we go all the way to the end of the season in all competitions hopefully, and we'll pick the bones out of it.

"We won't get too panicked about it and we'll get back on track sooner rather than later."