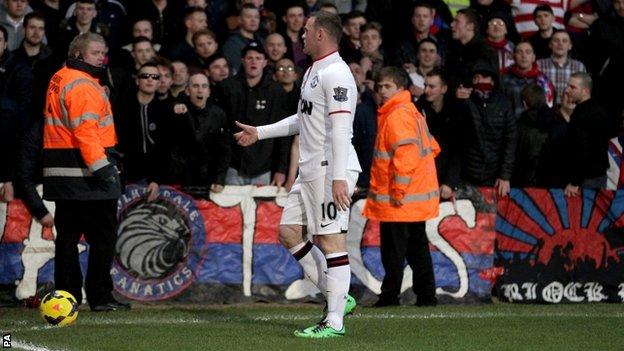 The England striker who has signed a new five-and-a-half-year contract, appeared to have coins thrown at him during the first half of the 2-0 win.

"I would have thought all these supporters will be cheering for him in three months," said Moyes.

"It happens. He's a top player and I don't think it bothered Wayne."

Reflecting on Rooney's new deal, the United manager added: ""It is great news. It is a great signing for us.

"To try and buy a player like Rooney is going to cost you a lot of money or they are not available.

"We never had any intention of letting him go. Wayne has been great since day one and his performances have merited being talked about as well as he has been. Anything he earns is down to him."

Rooney celebrated the signing of his new deal, which is worth up to £300,000 a week, by doubling United's lead at Selhurst Park with a stunning 12-yard strike.

His strike partner Robin van Persie had earlier put the visitors ahead from the penalty spot in a game in which Moyes also started Adnan Januzaj and Juan Mata.

"They are all great players. We have great flexibility in the team and I thought we linked up quite well," said Rooney.

"It is going to take time to see us all our at our best but, once we do, it could be a great, exciting time for the club. We also have Danny Welbeck and Javier Hernandez to come in. We have great forwards."

The 2-0 victory moved United to within eight points of the Premier League's top four ahead of Tuesday's Champions League last 16 first-leg tie at Olympiakos.

"It is achievable [the top four] but it is going to be difficult," he said. "We need a winning streak and hope the other teams drop points. We never say die. Next season our target is to win the Premier League."