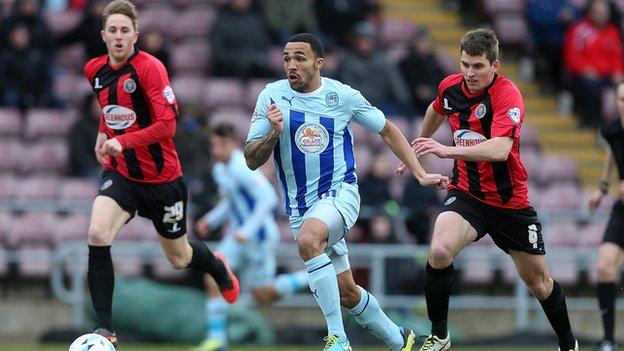 Coventry City ended their three-game losing run, but could not find a way past Shrewsbury Town at Sixfields.

In blustery conditions, Mike Jackson's relegation-threatened Town moved to within three points of safety with a second clean sheet in three matches.

Town have the edge over City

On a day when the home side did not manage a single effort on target, the on-loan QPR winger blazed his effort over the bar following Callum Wilson's flick.

He forged a new partnership with Arsenal loan man Chuba Akpom, who went close with the first chance of the game when his shot inside the penalty area flew narrowly wide.

Shrewsbury, who remain in 22nd place, might have stolen the points late on, but Murphy was on hand again to deny midfield man Dave McAllister.

After sliding to within two points of trouble, Coventry's first point in four matches lifts them three places to 13th, ahead of Wednesday night's next 'home' date against Walsall.

"Hopefully that will give us the base to go on and win games. The run of disappointing results of late has affected the confidence of the team.

"But the players have been working exceptionally hard. Confidence only comes from results and hopefully this is something we can take confidence from.

"We're not scoring goals in the same prolific manner as we were at the start of the season, so we have to look at getting results in a slightly different way.

"We've been losing far too many goals. We needed to tighten up in that department. The teams keeping clean sheets are the teams at the top end of the table."

"We had some great chances to win. Obviously, it should have been three points, but it wasn't.

"But I can't remember the last time we went three games unbeaten. It's still a good point and, if we win at home against Bristol City next week and stay unbeaten, that breeds confidence.

"Defensively as a team, after the stuff we worked on through the week they've done excellently. They've worked so hard as a group.

"People have got to see that the team is working together. They're trying to get out of this. They're not just going to roll over."