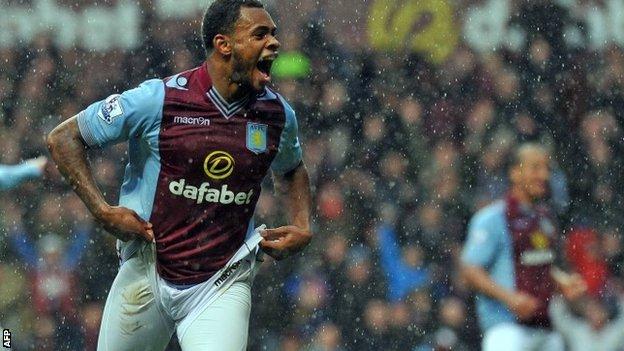 Aston Villa came from behind and eased their relegation worries with four goals in 15 minutes in a ruthless first-half display against Norwich.

Wes Hoolahan side-footed Norwich ahead but Christian Benteke struck twice in two minutes - a superb volley and a header - to put his side in front.

Sebastien Bassong's own goal added to Norwich's woes and the Canaries remain close to the drop-zone.

Norwich, who would have hoped to capitalise on last week's 1-0 victory over Tottenham, are four points ahead of 18th placed Sunderland, but the League Cup finalists have played two fewer games.

The Canaries' final four league matches of the season are against Liverpool, Manchester United, Chelsea and Arsenal.

But ahead of this clash, City manager Chris Hughton said his team should accept the game's "ups and downs", though he would not have expected to experience such a range of emotions in a mesmerising opening 45 minutes.

His team made the perfect start - Gary Hooper picking out recalled team-mate Hoolahan who calmly side-footed into the corner from 12 yards - but dramatically unravelled thereafter.

Such a handsome victory over his former employers will no doubt please Villa manager Paul Lambert, but he will mainly take delight in his side having opened a seven-point gap between themselves and the Black Cats.

It was a result few would have predicted when Norwich were breaking forward with ease in the first 10 minutes and murmurs of unrest could be heard rippling around the stadium.

But momentum swung Villa's way in an astonishing 15-minute period and the boos were soon replaced by roars of approval.

Benteke inspired the revival and his first goal was breathtaking. With his back to goal the Belgian beautifully controlled Ron Vlaar's hopeful ball into the box with his chest and, with a shuffle of the hips, volleyed beyond a helpless John Ruddy.

The striker's second was a simple close-range header from an Ashley Westwood corner but equally as effective.

Norwich were shell-shocked and Villa took advantage as Gabriel Agbonlahor, Andreas Weimann and Bacuna counter-attacked with pace, with the latter curling his strike into the far post.

The visitors then struck a nail into their own coffin when Bassong, under pressure from Agbonlahor, directed Fabian Delph's cross into his own net.

It was only the second time Aston Villa had scored four goals in the first half of a Premier League match. The last time they did so was in their 7-1 win against Wimbledon in February, 1995.

Villa had not scored in three league matches prior to this match so it was perhaps optimistic to expect them to repeat their free-scoring first-half exploits after the break.

Agbonlahor should have extended his team's advantage but instead headed Delph's cross straight at Ruddy. The former England forward was denied once more by Ruddy in the dying minutes as the onrushing goalkeeper saved with his legs.

But they were misses which had little impact on a game which ended Villa's four-match winless run in the league and secured them just their third win in 15 matches.

Check out the best photos from Sunday's Premier League matches on the BBC Sport Facebook page.