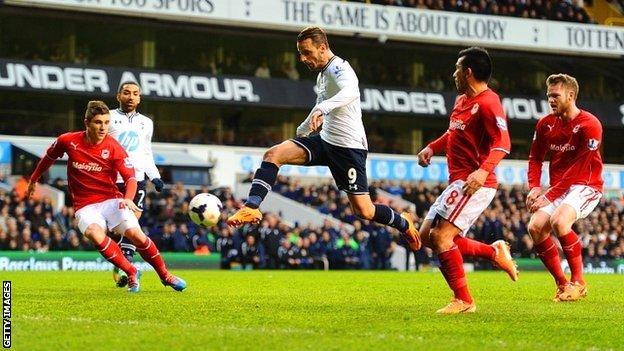 The Spanish striker was hugely relieved as he swept in after a counter-attack for his 11th goal of the season.

Cardiff's Steven Caulker almost scored against his former club when he hit the crossbar from two yards.

Defeat for Cardiff boss Ole Gunnar Solskjaer means his side are still three points from safety and failed to overtake third-bottom Sunderland, who were beaten by Manchester City in the Capital One Cup final.

In front of watching owner Vincent Tan, the Norwegian stretched his poor record to just one win from eight Premier League games since he took charge at the start of January.

After their 4-0 thumping at home to Hull last weekend, it was clear Solskjaer intended to give his side greater assurance by employing three centre-backs, allowing wing-backs John and Fabio to race down the flanks.

Although they caused problems in the first half, Cardiff did not exert any sustained pressure on the Spurs goal after the interval and have only 10 matches to save their season, with bottom-of-the-table Fulham their next opponents.

When Solskjaer took over, Cardiff were 17th in the table, and four points off the bottom - since then, they have scored just four goals, conceded 17, and are 19th, one point off the bottom

Victory for Tim Sherwood's Spurs, meanwhile, was a positive response to their 1-0 defeat by Norwich in their previous league game as they kept their Champions League hopes on track.

They are four points adrift of Manchester City, who have two games in hand, but if they are to make it into the top four they will need to find more energy against league leaders Chelsea and third-placed Arsenal in their next two games.

The hosts struggled to break down a well-organised Cardiff team, whose game plan almost completely disintegrated when Craig Bellamy, back from suspension, nearly talked himself into an early sending-off.

Bellamy was booked by referee Phil Dowd for dissent as he protested against a deserved yellow card for Kim Bo-Kyung, and only what seemed a last-minute change of mind from the official saved him from being dismissed.

Though Cardiff's new approach appeared to be working, they went behind from a quick Spurs counter-attack.

Andros Townsend broke forward following a Cardiff free-kick, passed inside to Emmanuel Adebayor and the Togolese striker fed the onrushing Soldado, who took one touch and found the bottom corner.

Cardiff almost struck back instantly when Caulker headed against the woodwork following a corner, and John later raced forward but was denied at the near post by Lloris.

The hosts began to reassert their authority after the break and came very close to earning a penalty when John tripped Aaron Lennon on the corner of the area, but Dowd decided the first contact was outside the box.

With an hour gone, Solskjaer decided to play four defenders at the back as he introduced Kenwyne Jones.

But he made little impression and Spurs came closest to scoring in an underwhelming second half when David Marshall saved substitute Harry Kane's effort.