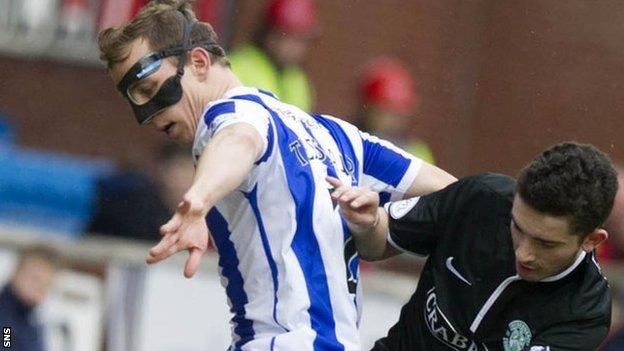 Jeroen Tesselaar braved another game for Kilmarnock despite having broken his nose for a third time this season and facing wearing a protective face shield for the rest of his career.

The 25-year-old Dutchman has been an ever-present for most of the season, including the 1-1 draw with Hibernian.

"I need to wear some protection," said the defender.

"I don't know for how long yet. Until the summer for sure, but maybe forever or for another year."

Tesselaar has played on despite suffering a recurrence of the broken nose.

"I broke my nose at the beginning of the season two weekends in a row and now I broke it again," he explained

"You get used to it because I train every day with the mask as well."

Kilmarnock manager Allan Johnson has, meanwhile, stressed the importance of capitalising on two home games in their next three fixtures.

The draw left his side five points behind Hibs and St Johnstone in the race for a top-six place, while wins for Ross County and Partick Thistle ensured that Kilmarnock are still under threat of relegation.

"It was vital we got the point, but we're disappointed not to get the three points," Johnston told BBC Scotland.

"We have got to be making sure we win our home games and we've got the opportunity over the next few weeks to build on that."

Johnston conceded that his side were only worthy of a point as Danny Hayes' second-half equaliser cancelled out an opener from Rory McKenzie set up superbly by Kris Boyd.

"Probably, overall, it ended up a fair result," he said. "In the first half, I thought we were the better team.

"We passed the ball quite well on occasions, caused them a few problems, scored a really good goal, great movement and a great pass from Boydy as well.

"But we just didn't start right in the second half. They put a lot of pressure on in the first 15 minutes, we were on the back foot and they scored the goal."