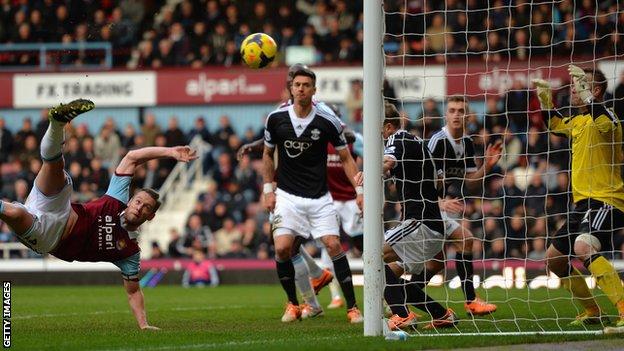 West Ham manager Sam Allardyce believes Kevin Nolan is one of the best goalscoring midfielders in the Premier League - but still does not think he stands a chance of an England call-up.

The 31-year-old scored his fifth goal in as many games in the Hammers' 3-1 win over Southampton on Saturday.

That victory, their fourth in a row, leaves West Ham 10th in the table.

"There are very, very few players better than him at scoring goals from midfield," said Allardyce.

England face Denmark in a Wembley friendly on 5 March, but Allardyce would be surprised if the former Bolton and Newcastle player is included in Roy Hodgson's squad.

"He has had a lot of times that he has knocked on the [England] door and I don't think that's going to make much difference for him now," he said.

"He is in his 30s now so he has got to continue his career as long as he possibly can by doing what he has always done, and that is score goals."