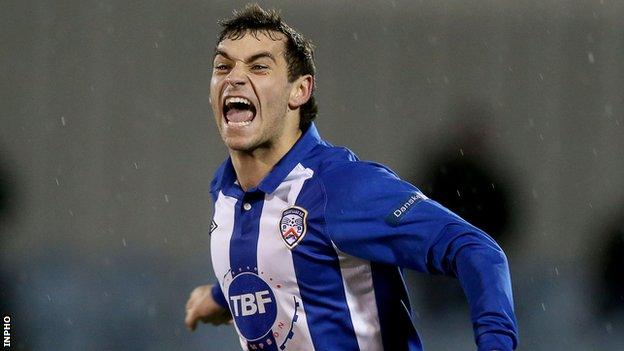 Coleraine were the only Irish League side to avoid defeat in the Setanta Sports Cup first legs as the Bannsiders won 3-2 in Dundalk.

David McDaid's two goals and a Ruairi Harkin effort helped Oran Kearney's side to come from behind to win.

However, Crusaders and Glentoran suffered 4-1 and 5-1 thumpings by Sligo Rovers and holders Shamrock Rovers.

Crusaders were minus injured trio Colin Coates, Timmy Adamson and Aidan Watson while manager Stephen Baxter also opted to rest a number of other regulars.

The under-strength Crues line-up were no match for last season's FAI Cup winners with Eric Odhiambo scoring a hat-trick on his Sligo debut.

Odhiambo put Sligo ahead on 17 minutes with Aaron Greene doubling the Rovers advantage on 39 before Odhiambo made it 3-0 in first-half injury-time.

The Sligo striker completed his hat-trick on 62 minutes and Declan Caddell's reply on 72 for little consolation for the well-beaten Crues.

At Tallaght Stadium, Robert Bayly put the home side ahead on seven minutes before John McGuigan levelled for the Glens in the 23rd minute.

But after their encouraging first-half display, the Glens, still minus unwell manager Eddie Patterson, collapsed in the second half as goals from Kieran Waters (61), former Cardiff and Leeds man Stephen McPhail (73), Gary McCabe (80) and Simon Madden (90) seemingly put the tie to bed ahead of next week's second leg.

Ballinamallard were unlucky not to earn a draw at a sodden Ferney Park as Chris Forrester's 21st-minute goal gave the League of Ireland champions a 1-0 victory.

Pat's had the better of the first half with Forrester missing a further good chance.

However, Whitey Anderson's Mallards improved hugely in the second half.

Substitute Andy Crawford had a glorious chance to level two minutes from time but he fired straight at Pat's keeper Rene Gilmartin.

Earlier, Crawford felt he had been tripped in the Pat's penalty area while referee Mark Courtney also disallowed a scrambled Mallards goal after controversially adjudging that keeper Gilmartin had been impeded.

At Oriel Park, Daryl Horgan gave Dundalk an 18th-minute lead but McDaid gloriously levelled on 34 minutes with a shot from 30 yards.

The ex-Derry City and York City striker then put Coleraine ahead four minutes after the restart following a cross from Ruairi Harkin.

Midfielder Harkin extended Coleraine's lead on 58 minutes and after David McMillan's reply two minutes later, the Bannsiders held on for a win despite Dundalk's late pressure.

Coleraine appeared to be denied a blatant penalty on 64 minutes after McDaid tumbled in the area following a challenge by Dundalk keeper Peter Cherrie although the home side also had a later spot-kick appeal turned down.