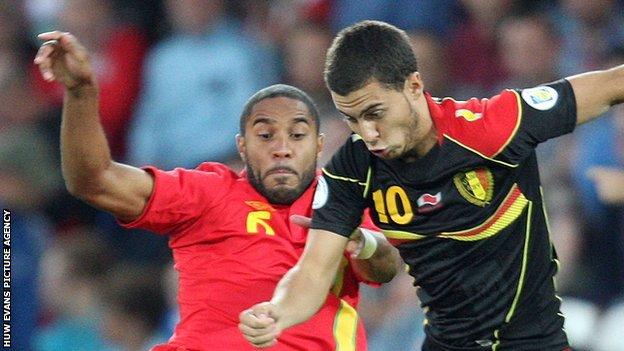 Wales captain Ashley Williams says the 2016 European Championship qualifying draw leaves them with nothing to fear.

Wales have not qualified for a major finals since the 1958 World Cup.

The 2016 Euro draw pits them against Belgium, Bosnia-Hercegovina, Israel, Cyprus and Andorra in Group B.

Wales twice faced Belgium during a failed 2014 World Cup bid, but Williams said: "Our two performances against Belgium in the last group means we've got nothing to fear again."

That last campaign began with a 2-0 home defeat by Belgium and ended with a 1-1 draw against them.

However, the Swansea defender accepts Belgium are favourites to top the group.

"We've got Belgium again so everyone would expect them to be the top team and we are going to compete.

"And then you look at the next group and you've probably got us, Bosnia, Israel trying to compete for second and third.

"But I think this time we can... really attack the group and I think our two performances against Belgium in the last group means we've got nothing to fear again."

Wales start their campaign away to Andorra on Tuesday, 9 September, then face top seeds Bosnia-Hercegovina at home on Friday, 10 October before welcoming Cyprus on the following Monday.

Chris Coleman's men face Belgium away on 16 November, with the return fixture on 12 June, 2015.

Wales complete their campaign at home to Andorra on 13 October, 2015.

The Euro 2016 finals are being hosted by France, who qualify automatically, and will be made up of 24 nations, an increase from 16 in the current format.

Looking forward to the qualifying games now we have our group. Some great games to come, got a good chance

The top two teams in each of the nine groups will reach the tournament finals, along with the best third-placed finisher.

The remaining eight third-placed teams go into play-offs in November 2015.

Coleman believes a finals place is up for grabs, particularly if they are at full strength with players such as Gareth Bale, Aaron Ramsey, Joe Allen and Williams on the pitch at the same time will be crucial.

Williams echoed that sentiment, saying: "We've got a lot of work to do before then, a lot of things to nail down.

"But this is one we really want to focus on and try and qualify.

"I feel like we've got enough in our team to qualify outright. We need to keep everyone fit and away from suspensions.

"We need to get our best 11 on the park every game, if we can I think we'll give ourselves a chance."