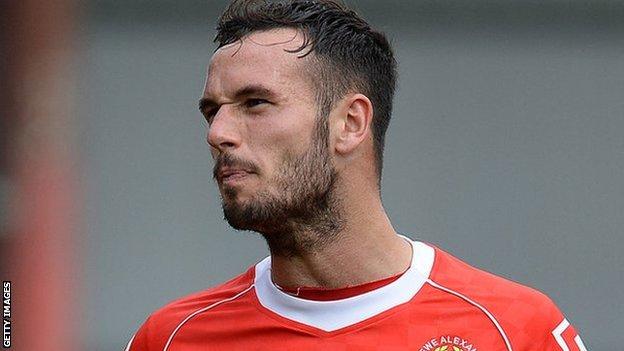 Molyneux's first of the night, followed by Kal Naismith's penalty, put Stanley two up inside 11 minutes.

Padraig Amond bundled in a consolation goal from a corner with six minutes left, but Molyneux had the final say.

The Crewe Alexandra loan man - who hit a hat-trick in the home win against then leaders Chesterfield earlier this month - stroked home from 15 yards in injury time.

And, as well as supplying the cross for Aldred's header, the lively Molyneux hit the bar with a long-range effort.

While Morecambe are now seven points adrift of the play-off places, Stanley are just three points further back, now six clear of trouble.

"I'm delighted with the performance. The lads were tremendous.

"We did the simple things well and got off to a great start in the game.

"That's something I've been talking to the lads about - about game management and getting a foothold in the game.

"I was a little bit annoyed that we started to dwell on the ball in midfield and get caught, so I had a word about that at half-time.

"We needed to go back to basics, the lads did that and we managed to get a couple more goals."

"It was a poor night and sorry to the fans who travelled over.

"I feel it more than anyone and it's embarrassing.

"It does your head in because you think you've turned the corner and then you think 'if you can beat Accrington, you're two points off the play-offs'.

"But I must be kidding myself and I must be believing in them too much. We've been pulled right back into it now, so we've got a battle on."