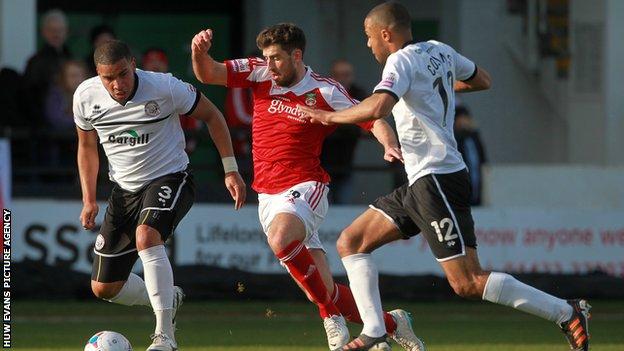 Wrexham earned their first win in the Conference Premier since they last met Hereford four matches ago.

The Dragons were in front in under a minute as the ball spooned off Bulls defender Luke Graham into the net.

Wrexham twice hit the woodwork before Dean Keates' low cross was turned in at the far post by Mark Carrington.

Hereford are now four points above the relegation zone in 18th, eight points behind 17th placed Wrexham, who are now eight points off the play-offs.

"I thought we were magnificent tonight right from the off. Obviously we had a little bit of luck with the first goal, but some of the play was as good as it has been all season.

"We challenged them to go out and have the courage and the conviction to believe in each other, believe in themselves and try to things we have not been trying recently.

"Everyone of them, again, was better than the opposition. I thought we were magnificent. I cannot talk anymore highly of the lads than they way they have adapted to the challenges we have thrown at them over the course of our time in charge."