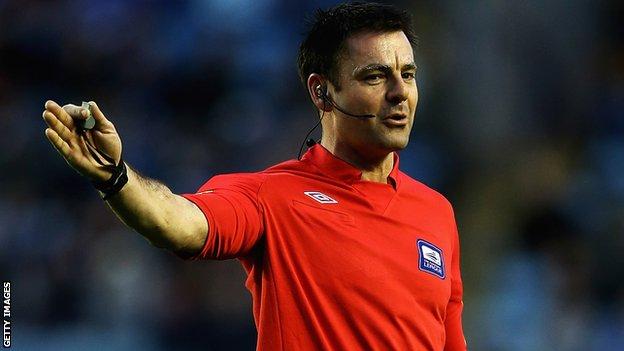 Promotion-chasing Brentford had to settle for a draw in a game which saw referee Eddie Ilderton change his mind about sending off Sheffield United's Kieron Freeman and awarding a penalty.

Freeman was dismissed after he was ruled to have fouled Marcello Trotta.

But, after consulting with assistant Mark Dwyer, Ilderton rescinded the red card and gave a drop ball.

"He got it wrong but he put it right," said Blades boss Nigel Clough. "It takes a lot of courage to do that."

The Bees stay second in League One, five points clear of Leyton Orient.

But there was only one talking point after the game, and Clough praised Ilderton for getting the decision right - eventually.

"He has to be commended for putting it right," the Blades boss said.

"We wish he hadn't got it that wrong in the first place, but he waited in the tunnel and talked to the lads at half-time and said he had a bad angle, so that is absolutely fine, everyone got on with the game. But it was very, very brave and the correct thing to do.

"If he'd have just given himself 30 seconds ... but as long as you get the right decision in the end, that's the main thing."

"I have never seen anything like that in my life before," he said.

"The obvious thing to do is just take your time and go over and speak to your linesman and then make your decision.

"But he has brandished the red card and given the penalty and all of a sudden we end up with a drop ball. It was absolutely bizarre, I have never seen anything like it before.

"I haven't seen it again, but the fact of the matter is he has brandished the red card and pointed to the penalty spot."

Brentford had their best chances in the opening 20 minutes as Trotta had a shot blocked while Clayton Donaldson and Toumani Diagouraga put efforts wide.

United's best opportunity came through Billy Paynter, who was brilliantly denied by a last-ditch tackle from James Tarkowski as he was about to put Conor Coady's cross into an unguarded net.