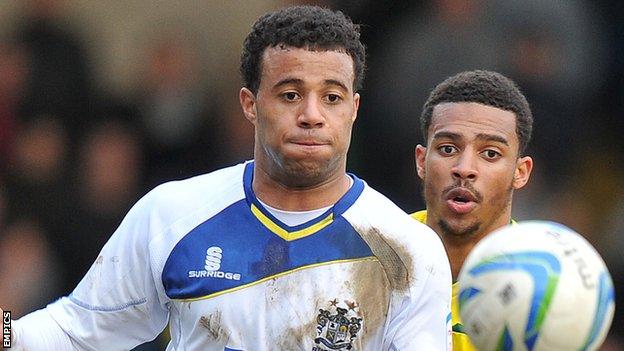 The substitute headed home Chris Hussey's corner at the near post soon after coming onto the field.

Bury got off to a great start as on-loan Everton youngster Hallam Hope smashed the ball past Steve Mildenhall.

"Saturday's game [at Northampton] was a big win but that was even bigger.

"They've come with a 'no-fear' attitude and I was really impressed with them. We didn't get to grips with them.

"Tactically I got it wrong, but we flipped it back and in the last 20 minutes we got a foothold back in the game.

"I can't express how delighted I am with the group. Don't forget the trouble we were in and it's been testing. It's been a massive effort from everyone at the football club to turn this around."

"In the first 20 minutes, we looked a little bit lost in the shape, but we grew into the game and controlled the possession.

"But how many times have we said it this season - we create opportunities, but we don't make the most of them.

"We conceded a sloppy goal from a set piece, which is unacceptable.

"It is a work in progress, but we've got to make it work quickly."