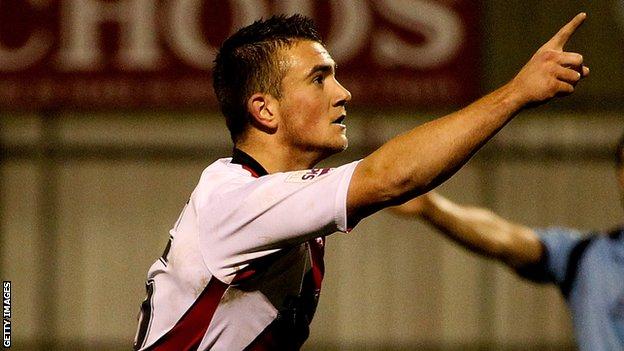 Woking moved to within seven points of the Conference play-offs as they beat Forest Green to secure their fifth consecutive victory.

Lee Hughes met Yan Klukowski's right-wing cross to smash home from a tight angle to put the hosts ahead.

Scott Rendell levelled for the visitors from the penalty spot after Eddie Oshodi had handled in the area.

But Jack Marriott earned the three points for Woking when he swept in John Goddard's pass from the right flank.

Woking's victory puts them up to 12th in the table, a point and a place behind Rovers.

"There's a lot of confidence and we played against a very good side and it was a good test for us, certainly after recent results.

"I am pleased for Jack Marriott because he's been working hard of late and he's not quite got the reward he would like.

"All credit to Steve Thompson and the players - the way they look after their bodies and condition themselves, because we are part-time club on paper and you see the level of commitment, which is second to none."

"We're comfortable winning 1-0 and there's only person who thought it was handball. I spoke to him [the referee] and he said it was his decision, so what can you do?

"The officials haven't had a good day but we move on and look forward to Barnet.