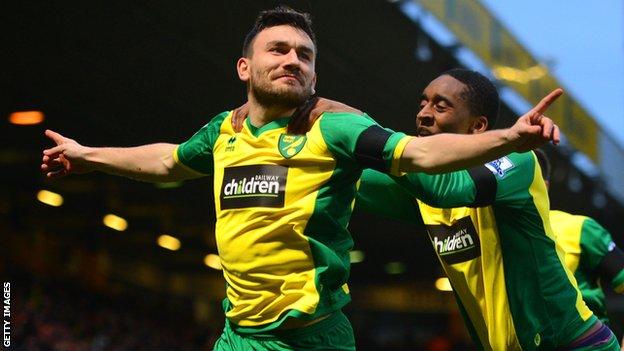 Snodgrass scored the winner in a 1-0 victory over Tottenham on Sunday.

"People have been very critical in the past about whether we go for it and different things. But we've had chances and it's up to players to score goals."

Recent results have heaped pressure on Hughton and victory over Spurs was Norwich's second win in 12 league games.

And the Canaries boss has been accused by supporters of being too cautious, with the Norfolk side scoring just three goals in their last eight games in all competitions.

But Scotland winger Snodgrass showed composure to finish past Spurs keeper Hugo Lloris and create a four-point cushion between Norwich and the relegation zone.

"We can't blame the manager when I go through one-on-one or Gary [Hooper] misses a chance," said the 26-year-old.

"It may be a defender, midfielder, winger - it's up to us to lift them up if they do miss a chance. We took our chance and we got three points."

Sunday's goal marked an upturn in fortunes for Snodgrass, who has had a fractured campaign so far.

His pre-season was affected by family concerns, injury ruled him out for a period before Christmas and a dip in form saw the midfielder exchange strong words with supporters during a game with Newcastle in January.

"It's been a very frustrating season for myself," he said.

"But as I've said in interviews this season, I'll keep going and driving towards making myself a better player and person. I believe I'm doing that."