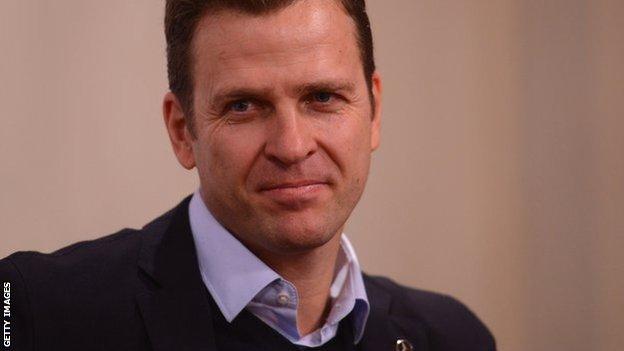 Oliver Bierhoff thinks Poland rather than Scotland or Republic of Ireland will be the main threat to Germany in Euro 2016 qualifying Group D.

The former Germany striker is now team manager, a non-coaching role, with his national side.

"Perhaps, for us, Poland is the more dangerous opponent because we have so many Polish players in our league," Bierhoff told BBC Scotland.

"There is a big rivalry historically, so they will be special games."

The trio's time with Borussia Dortmund has ensured they are players of "high quality", said Bierhoff.

Despite their presence, the former Udinese and AC Milan forward expects his country to qualify as group winners.

Ireland and Scotland have a lot of power, dynamism and heart, so we know that playing these teams for Germany is always difficult

"It is a very interesting group with very attractive opponents," said Bierhoff. "There will be a good atmosphere in the stadiums in Scotland and Ireland and that will help the players be motivated.

"Of course, we are the favourite in the group, we want to win the group, as we did in the last qualifications, but I think it won't be easy.

"Among the others, I don't know who will be the favourite to be second."

Germany were among the top seeds for Sunday's draw and are ranked second in the world, with Scotland the next highest at 34 in a group that also includes Georgia and debutants Gibraltar.

Coach Joachim Low was satisfied with the draw and insists he will not turn his attention to assessing his Group D opponents until after this summer's World Cup finals in Brazil.

"This group is interesting but also difficult, with Poland, Ireland and Scotland," he said.

"Of course, Germany is the favourite in this group, but Poland, Scotland and Ireland are also strong teams.

"Poland have some very good players - Lewandowski, Blaszczykowski and Piszczek, they are playing in the Bundesliga.

"But Ireland and Scotland have a lot of power, dynamism and heart, so we know that playing these teams for Germany is always difficult.

"I haven't seen Scotland the last two or three years, only on TV or DVD, but after the World Cup, we will try to assess these teams."