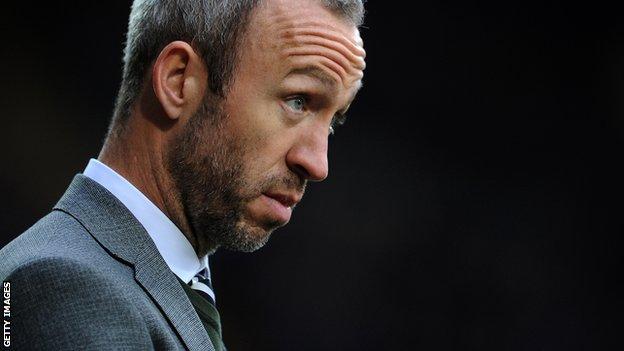 Notts County boss Shaun Derry has warned his players that they are fighting for their careers, not just League One survival anymore.

The Magpies blew an early two-goal lead at home on Saturday to slump to a 3-2 loss to relegation rivals Shrewsbury.

"It's judgement time for them. This is probably the biggest battle of their careers - everyone is now at a cross-point in their careers," Derry said.

It is inexplicable and demoralising

Talking to BBC Radio Nottingham, the 36-year-old added: "There are players out of contract, players who need to stay at this level to get another club, this is it for them.

"As soon as I came into the building I said the players that I inherited, and the one or two I've been able to bring in, are good enough to stay in this division and I stand by that."

However, Derry added that he will now try to look to bolster his side with an emergency loan deal this week.

The rookie manager, who succeeded Chris Kiwomya in November with the Magpies bottom of the table, admits he was left "embarrassed" after the Shrews defeat - their fifth in six games - while victory was Shrewsbury's first in eight dating back to New Year's Day.

Notts' run of losses includes a 4-3 defeat at Peterborough, in which they also led 2-0 early on.

And just as the game at London Road turned after Ronan Murray's red card, James Spencer's sending-off against Shrewsbury was a pivotal moment.

"Once again we absolutely pressed the self-destruct button, just like we did away at Peterborough," Derry said. "That is six points that could be unbelievably costly between now and the end of the season - and I'm not accepting that.

"In my honest opinion we started playing selfishly, as individuals and not as a team.

"There is a lack of discipline across the board, from red cards to other offences that I'll keep private.

"It's ingrained, unfortunately, for Notts County at the minute. It's been going on for a while now, and I'm trying to get that out of them every single day.

"It is inexplicable and demoralising, but [assistant] Greg [Abbott] and I need to lift them."