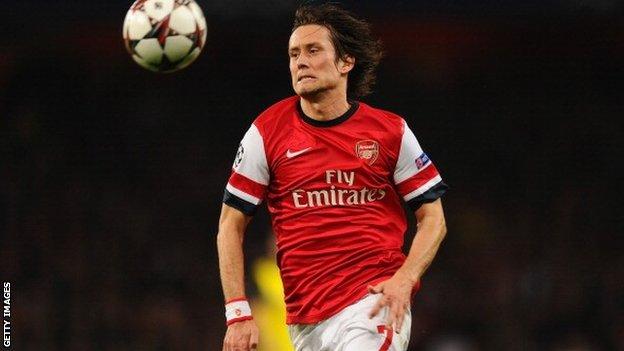 Arsenal manager Arsene Wenger is "absolutely adamant" midfielder Tomas Rosicky will stay with the club beyond the end of his current deal.

The midfielder, 33, who joined from Borussia Dortmund in 2006, is out of contract in the summer.

The Czech impressed as he stood in for the injured Mesut Ozil during Saturday's 4-1 win over Sunderland.

"Tomas Rosicky will stay. We have an agreement with him and it will come out soon," said Wenger.

Rosicky, whose time in north London has been hampered by a string of injuries, was praised by Wenger for his contribution during the Sunderland victory, with the playmaker scoring the third goal.

"I am absolutely adamant he has to stay at the club," added Wenger.

"He is maybe one of the players who plays the game of give and move. He is a great accelerator of the game.