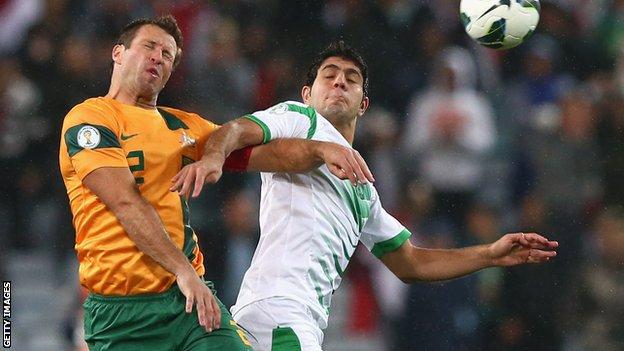 Watford have signed Australia defender Lucas Neill for the rest of the season.

The 35-year-old ex-West Ham, Everton and Blackburn player has been training with the Championship club after leaving Japanese side Omiya Ardija.

The 6ft 1ins full-back has 96 caps for Australia and has played in two World Cups with the Socceroos.

"I've spent 14 years of my career in England and my family are based here. I'm highly motivated to keep playing," Neill told the club website.

"I want to add my experience to the Watford squad and I'm hoping that some of my natural leadership skills can benefit the group here."

Neill played 89 times for West Ham between 2007 and 2009 following his move from Blackburn, where he made 232 appearances.

He left Everton for Galatasaray in January 2010 and since then has had spells with Sydney FC and, most recently, in the Japanese J-League.

"I took up challenges in different countries because I wanted some new experiences, but this is a great chance for me to play at an excellent level and help Watford finish the season as strongly as possible," Neill added.

Neill played 90 minutes for Australia in a friendly against Scotland in August 2012 but has not featured on British soil since.