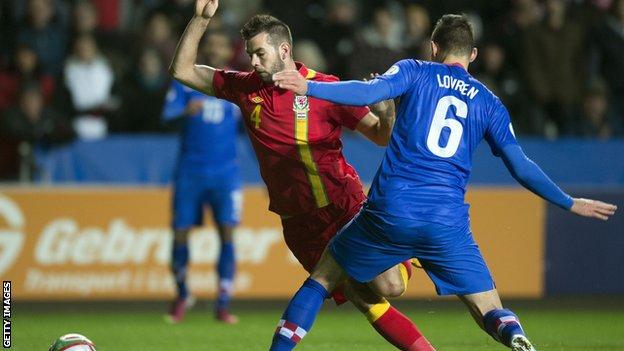 The 27-year-old suffered a hip injury in Palace's draw at Swansea in the Premier League on Sunday.

Arsenal midfielder Aaron Ramsey, 23, is also absent with the thigh injury that has kept him out since December.

Captain Ashley Williams has recovered from illness while Real Madrid forward Gareth Bale is included for the match at the Cardiff City Stadium.

The 20-year-old, currently impressing on loan for Birmingham City in the Championship, was an unused substitute in Wales' 1-1 friendly draw with Finland last November.

"He is a young player who deserves his chance," said Wales manager Chris Coleman.

"He has done very well through the ranks at Manchester City and now, recently, has really done well on loan at Birmingham City.

"With Aaron Ramsey still being unavailable it is a good chance to have Emyr with us and show us what he can do in training."

Coleman is also without Charlton striker Simon Church and Sunderland midfielder David Vaughan through injury, but is confident that Bale will be available for their friendly, despite the demands of playing for Real Madrid.

The world record signing, who was bought for £85m from Tottenham last summer, scored his 12th goal in 24 matches for the Spanish giants in their 3-0 win over Elche at the weekend.

"We only have a limited number of preparation matches, so it is important that he is with us, but I will monitor the situation," Coleman said.

"He has had a great start at Real Madrid, with plenty of goals and assists. He is adapting well to living in a foreign country and I think he is doing great."

The game against Iceland is the start of the build-up for the team's Euro 2016 qualifying campaign.

Wales have been drawn against Belgium, Bosnia-Hercegovina, Israel, Cyprus and Andorra in Group B.

Coleman's side also have a friendly confirmed against the Netherlands in Amsterdam on 4 June, and begin the Euro 2016 campaign at home to Andorra on 9 September.

The Euro 2016 finals are being hosted in France, who qualify automatically, and will be made up of 24 nations, an increase from 16 in the current format.

The top two teams in each of the nine groups will reach the tournament finals, along with the best third-placed finisher.

The remaining eight third-placed teams go into play-offs in November 2015.