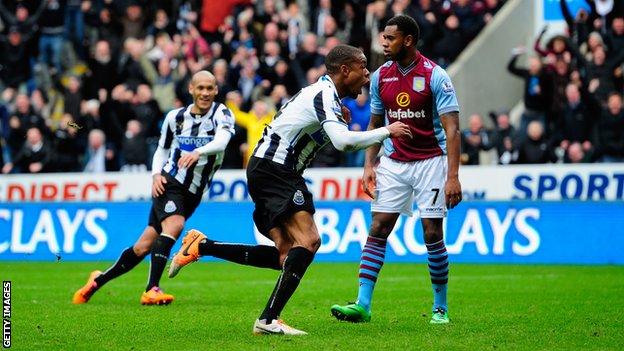 Newcastle boss Alan Pardew has hailed Loic Remy after the striker scored his 12th goal of the season.

The 27-year-old, who is on loan from QPR, grabbed a 92nd-minute winner against Aston Villa on Sunday.

Remy had missed the Magpies' previous three matches because of suspension, during which time they failed to score or collect any points.

"Loic is the player who can make the difference for us. There aren't many like him," Pardew told BBC Newcastle.

"Quality-wise I'd say our performance against Villa was a maximum seven out of 10.

With or without Remy

"But in terms of commitment, it was a 10. That gave us the platform for the best player on the pitch to make that difference."

Since arriving in August as Newcastle's only close-season signing, Remy has scored 12 times in 22 league appearances, helping them to eighth in the table.

Last term, having opted to join QPR instead of the Magpies, the former Marseille forward managed a similar ratio with six goals in 13 games.

In the January transfer window, Newcastle's other main supply of goals, Yohan Cabaye, was sold to Paris St-Germain for £19m, just 24 hours after Remy was sent off against Norwich City.

"You take Cabaye and Remy out of our team and it leaves a big hole," Pardew admitted.

"In the summer, we need one or two more big players like that.

"When you're in injury time, at 0-0, and the team haven't scored in four games, you need a special player.

"And Loic has put the centre-half on the floor, waited for the goalkeeper to move, and scored. We need him."