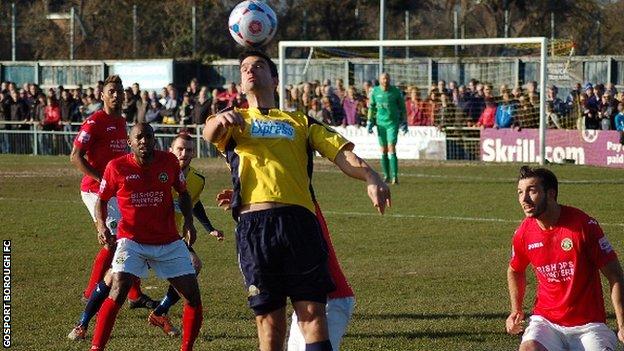 Manager Alex Pike is planning a "David and Goliath" job when he takes Gosport Borough to Wembley to take on Cambridge United in the FA Trophy Final.

Pike's side upset neighbours Havant and Waterlooville 3-1 on aggregate in the Trophy semi-final.

Pike told BBC Radio Solent: "Hopefully them going for promotion to League Two will be a distraction."

After drawing the first leg 1-1 at fellow Conference South side Havant, two goals from Tim Sills sent Gosport to the final, making them the first team from outside non-league's top flight to make the showpiece since Grays played Hucknall in 2005.

Pike, a former policeman, knows what it takes to cause a Wembley upset, having guided Wessex League Wimborne Town to a 5-3 victory over Guiseley in the final of the FA Vase in 1992, when he was just 31.

"Even after we drew the first leg Havant were still favourites, and once you've had time to reflect, we've always sort of treated them as our older brother and you have to feel for them.

"But when we go to Wembley we'll put all that behind us and try to do a David and Goliath act on Cambridge. We're the first club from the Solent region to reach the Trophy final, but when I took Wimborne to Wembley for the Vase Final in 1992 it was the same thing, so all the omens are there.

"Cambridge are second in the Conference and flying high and going for promotion to League Two, so hopefully we can use that as a distraction."

Pike will travel to Wembley on Thursday when the FA will toss a coin to decide which club uses the home changing room and wears home colours.

In the meantime, however, Pike is concentrating on the club's parlous league position, five points adrift at the bottom of Conference South, albeit having played six fewer games than second-bottom Dorchester.

"I have to get lads' feet on the ground and we have to focus, but I have every faith the players will get us out of trouble.

"Against the best Havant side I've seen in years, the one thing I think we had over them was togetherness and team spirit. When you get gifted, talented players you have to go out and get them from outside your region and some of them come miles and you lose a bit of team spirit and togetherness and I don't think there's any compensation for that.

"My players have got that in abundance, they know the job in hand. It took us years to get into that league and we don't want to give it away easily."