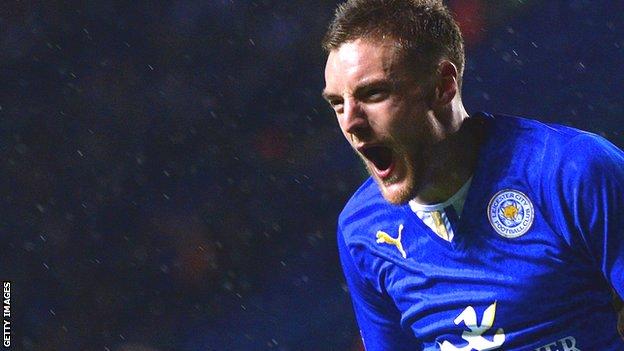 Pearson said Vardy's latest strike, putting the Foxes ahead in Saturday's win against Ipswich after pouncing on a back-pass, "epitomised" his Foxes rise.

Jamie Vardy scored 34 goals in 40 appearances to help Fleetwood win promotion to the Football League in 2012.

"There will be more to come [from Vardy], no doubt about it," Pearson told BBC Radio Leicester.

"If you look at the goal that he scored, it was a terrific finish. I don't know if people appreciate how tough that is to put the ball in from the angle that he had.

"Certainly, moving at the pace that he did, it was a terrific goal and it really epitomised what he has done this season."

Vardy netted five times in 29 appearances in his debut campaign at the King Power last term.

Chris Wood, who came off the bench to score Leicester's third on Saturday as they extended their unbeaten Championship run to 13 matches, has been impressed by Vardy's continual improvement for the league leaders.

While Vardy has been preferred up front by Pearson ahead of Wood, the New Zealand international and ex-West Bromwich Albion striker has scored six times in 19 appearances this season.

"The lads that are on the pitch are keeping their shirts and going their jobs well," Wood said.

"He has come on leaps and bounds. His work rate is up there every single game no matter what - if he is having a good game or bad game, he works hard and that is what we all like to see."