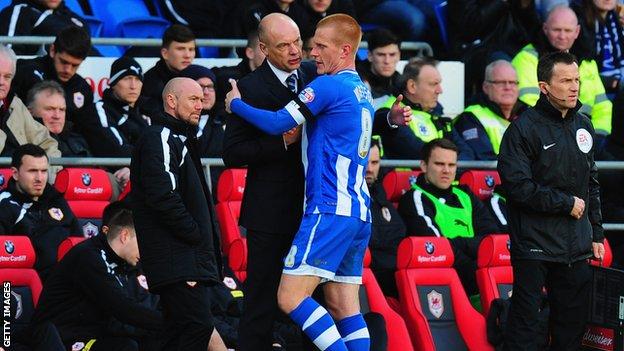 Manager Uwe Rosler says Wigan were desperate to beat Brighton on Saturday for Ben Watson and dedicated their 2-1 win to the injured midfielder.

Watson, 28, is likely to miss the rest of the season after breaking his leg against Barnsley four days prior to Wigan's victory at the Amex Stadium.

"We really wanted to give him that win," Rosler told BBC Radio Manchester.

"We miss him as a player and also as a person. He's a great character in the dressing room and we all miss him."

Rosler continued: "All our thoughts are with him, but we have move on as a team and get results. We can't use it as an excuse that Ben is not with us in the next few months to come."

The former Brentford boss has revealed he may try to sign a player on loan to cover for Watson, who had surgery on his injury on Friday.

"Don't ask me when or who, because at the moment I have nothing lined up," said Rosler.

"At this time of year, to find a player with Ben's quality is very difficult - nearly impossible - because all of those players are always kept, but we maybe can find a player with different qualities who can add something to our squad."

Goals from James McArthur and Chris McCann continued Wigan's impressive run and put them within a point of the play-off places.

The Latics also have a game in hand on five of the six teams above them in the Championship.