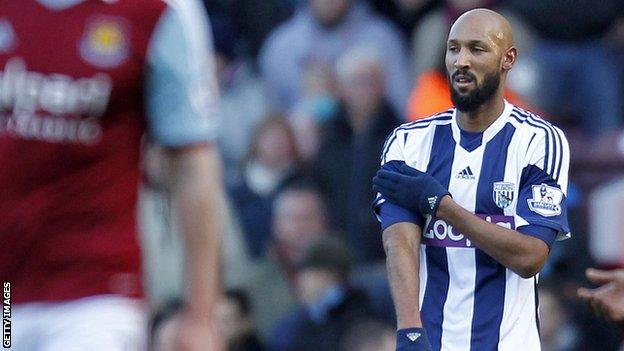 West Bromwich Albion have suspended striker Nicolas Anelka after he was banned for five matches and fined £80,000 for his "quenelle" gesture.

He has also been ordered to complete a compulsory education course, following a two-day Football Association hearing.

Anelka, 34, denied his use of the sign during a draw with West Ham on 28 December and described as an "inverted Nazi salute", was anti-Semitic.

West Brom have suspended him until the outcome of any appeal and club inquiry.

Anelka is considering whether to appeal against the FA's ruling; if he does, his five-match ban and fine would be put on hold pending the outcome.

The Frenchman and his legal team had defended his actions to the FA's independent regulatory commission hearing, saying the controversial gesture was in support of his friend, the French comedian Dieudonne M'bala M'bala - the person who first brought the quenelle to prominence.

The action, which the striker made after scoring in the 3-3 draw at West Ham, was described afterwards by France's sports minister Valerie Fourneyron days as "shocking and disgusting".

Anelka responded at the time by saying the salute was "anti-establishment", rather than anti-Semitic. The French government is trying to ban M'bala M'bala's shows over his use of the gesture.

We did not find that Nicolas Anelka is an anti-Semite

The commission's three-member panel, headed by a QC, said in its ruling that both charges against Anelka had been proven - that the gesture was abusive and/or indecent and/or insulting and/or improper, and that it included a reference to ethnic origin and/or race and/or religion or belief.

However the panel added it did not believe Anelka had been deliberately anti-Semitic.

The commission statement said: "So far as the basis for our finding on charge 2 is concerned, we did not find that Nicolas Anelka is an anti-Semite or that he intended to express or promote anti-Semitism by his use of the quenelle."

His five-match punishment is the most lenient that could have been imposed under the FA's new anti-discrimination rules.

In a statement following the ruling, West Brom said it treated "very seriously any such allegation which includes any reference to ethnic origin and/or race and/or religion and/or belief".

"The 34-year-old's 'quenelle' goal celebration against West Ham in December has directly associated him with French comedian Dieudonne M'bala M'bala, a man who encourages the use of the gesture and has been convicted seven times of anti-Semitic hate speech.

"Anelka has insisted his action was 'neither anti-Semitic, nor racist' but with West Brom losing a key sponsor and the Frenchman now banned for five games, it is one of several controversial incidents that have hung over his otherwise successful career."

"Upon both charges being proven, the club has suspended Nicolas Anelka pending the conclusion of the FA's disciplinary process and the club's own internal investigation."

It added it acknowledged the panel did not find Anelka to be an anti-Semite but said it could not "ignore the offence that his actions have caused, particularly to the Jewish community, nor the potential damage to the club's reputation".

The club said it would not comment further until the end of any appeal and its own internal inquiry.

Vivian Wineman, president of the Board of Deputies of British Jews, told BBC Radio 5 live he welcomed the decision to make Anelka undergo a compulsory education course.

"That's one of the most attractive parts. We want to educate people. Anelka said he didn't realise it was anti-Semitic, well that kind of ignorance is dangerous.

"The quenelle is something that few of us in the UK recognise. In France it's known as being a vicious anti-Semitic gesture."

Football's anti-discrimination group Kick It Out said it would wait until Anelka had decided whether to appeal before commenting.

Anelka has seven days from receiving written reasons for his FA punishment to decide if he wants to appeal against the ruling.

He must also pay the costs of the hearing in full.