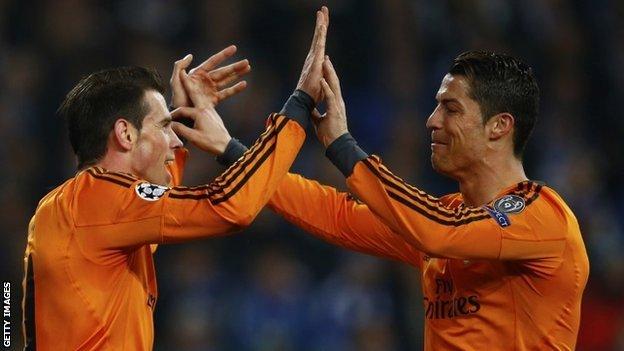 Gareth Bale scored twice as Real Madrid hammered Schalke away to all but reach the Champions League quarter-finals.

The Welshman netted his side's second after a mazy dribble and added a cool finish for Real's fifth.

Cristiano Ronaldo beat Joel Matip with a flurry of stepovers for a superb third as he and Karim Benzema also scored twice in a thrilling display.

Klaas-Jan Huntelaar's spectacular injury-time volley pulled a goal back, but the tie seems over as a contest.

Madrid's pursuit of a 10th European Cup has become a growing obsession since their last victory in the competition in 2002 and the slick way their expensively assembled attack combined will have their supporters dreaming that their wait could soon be over.

Schalke have enjoyed a recent resurgence in the Bundesliga but that form proved meaningless against Real Madrid's speed and skill as the Spanish giants scored for a record 32nd successive Champions League game.

Home manager Jens Keller had presciently claimed in the build-up that his side would need "a small miracle" to advance and his side began in correspondingly cautious fashion.

The initial signs were promising with Benedikt Howedes heading just wide and the visitors were held comfortably at bay in the early stages. But the Germans crumbled in the face of Real's first purposeful attack.

Bale, cutting in off the flank, left Sead Kolasinac reeling with a change of pace and direction before feeding Ronaldo. The Portuguese's attempt to flick a pass back into the path of Bale was partially cut out by Felipe Santana but Benzema was on hand to sweep home the loose ball.

Schalke should have been level 77 seconds later. Julian Draxler met Jefferson Farfan's cross five yards out with a clean connection but a full-length point-blank stop from Iker Casillas denied what seemed a certain equaliser.

Max Meyer snatched at the rebound and from that let-off Real accelerated away to carry the tie surely out of the Germans' reach.

Bale, buoyed by his superb long-range effort in Real's 3-0 weekend win over Elche, was lively throughout and produced another gem after Benzema had pounced on a dawdling Santana.

The Welshman weaved through the remnants of the Schalke defence, deftly shifting the ball from left foot to right, before poking a neat finish inside the near post.

How the last-16 ties stand on aggregate before second legs

Ronaldo had only been kept off the scoresheet by the inside of the post and two good reflex saves from goalkeeper Fahrmann, but Schalke could only deny him so long.

Shortly after the restart, centre-back Matip found himself isolated one on one with Ronaldo and a triple stepover later was tackling thin air, with the World Player of the Year round him and firing into the bottom corner.

The Real onslaught was unrelenting. Benzema combined sweetly with Ronaldo before sliding home a low shot for a fourth and Bale was similarly dead-eyed when he rewarded Sergio Ramos's disguised through-ball with a precise finish.

Ronaldo rounded the beleaguered Fahrmann to add a sixth, however the home fans that remained saw their side score the best goal of the night.

Huntelaar, who spent seven months at Real Madrid in 2009 before leaving for AC Milan, crashed an unstoppable volley past former team-mate Casillas from the edge of the area to at least give his side something to show from a demoralising night.

Shots on Target
Home4
Away11