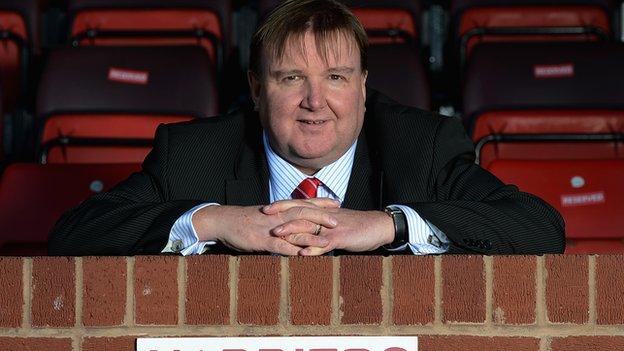 Kidderminster Harriers chairman Mark Serrell made his decision to stand down at Aggborough as he was getting too much social media abuse over last month's sacking of manager Steve Burr.

Serrell resigned on Saturday with the club 10th in the Conference Premier.

"I believe it centres around the sacking of Steve Burr and then the appointment of Andy Thorn," he added.

"And results have not been fantastic since Andy took charge."

A lot of people have got short memories. Three years ago there wasn't going to be a Kidderminster Harriers

Burr, who has since taken over at fellow Conference Premier side Chester, was sacked by Kidderminster on 7 January, to end four generally successful years at Aggborough.

Having been appointed in January 2010, he helped to steer the club away from the threat of financial oblivion by twice earning sixth-place finishes, in 2011 and 2012, before helping them to recover from a bad start to finish second, only to then lose to Wrexham in the play-off semi-finals.

After a run of four defeats in five league games (one of them a club Conference record 6-0 beating at Luton), Harriers parted company with Burr just three days after his team had held League One side Peterborough United to a goalless draw in the third round of the FA Cup.

But, since winning their first two matches under his replacement, former Coventry City manager Andy Thorn, Harriers have since picked up just two points out of a possible 15 and now lie six points adrift of the play-off zone.

It was after Saturday's 2-2 home draw with Braintree (watched by 1,653 fans, their third-lowest home crowd of the season) that Serrell, the man who handpicked Thorn, chose to step down.

"It's been levelled at Mark that he made that decision, whereas it was actually a board decision," said Rae. "And the board were unanimous.

"A lot of people have got short memories. Three years ago, there wasn't going to be a Kidderminster Harriers.

"But for Mark Serrell and his wife and a few other people, Kidderminster Harriers would not be there."

Former Redditch United chairman Rae, 42, is bracing himself for a further Harriers boardroom resignation - that of the influential John Davies, owner of local tools specialist Hire-It, the club's main sponsor.

"I've been led to believe that he will be resigning from his position," added Rae. "But I've asked him not to do that as we still need all hands to the pump.

"He's been a superb supporter of the club and I certainly hope that will continue in the future.

"John is still our sponsor, Hire-It is still under contract as our sponsor and we've not had any conversation that he won't be next season.

"I still believe we can make the play-offs and, for that, we need everybody pulling in the same direction."

The Harriers' next fixture is at home to Woking in the Conference Premier on Tuesday night.