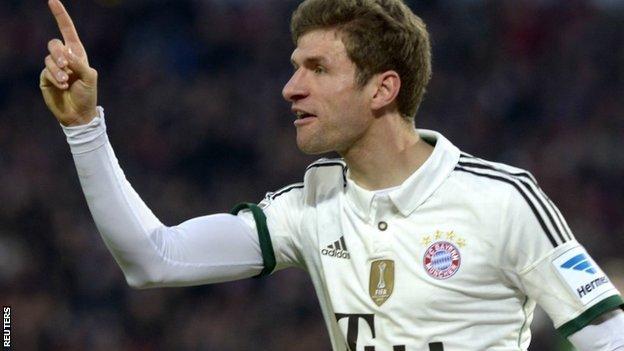 Bayern Munich forward Thomas Muller says nothing can stop them retaining the title.

The European champions could win the Bundesliga in record time, beating last year's achievement of securing top spot with six games to spare.

Bayern's last Bundesliga reverse was in October 2012, a 2-1 home defeat by Bayer Leverkusen.

Boss Pep Guardiola has not lost a league match since April 2012, when Barcelona were beaten 2-1 by Real Madrid.

They are 19 points clear of Bayer Leverkusen with 12 games left and have not lost in 47 league matches.

"Anybody who follows the Bundesliga a bit knows there's not much that can go wrong at this point," Muller said.

"The way we're going and winning games, it's only a matter of time."

The Germany international, 24, scored twice as Bayern earned a 14th successive league victory by winning 4-0 at Hannover on Sunday, although he picked up a hamstring injury, which means he cannot return to light training for five days.

Coach Pep Guardiola, who took charge of Bayern in June last year and has yet to lose a Bundesliga match, said: "One game less, three more points. It took a while for us to find our rhythm [at Hannover]. We played very well after opening the scoring.

"We're looking at the table but at the end of the day it's all down to us."