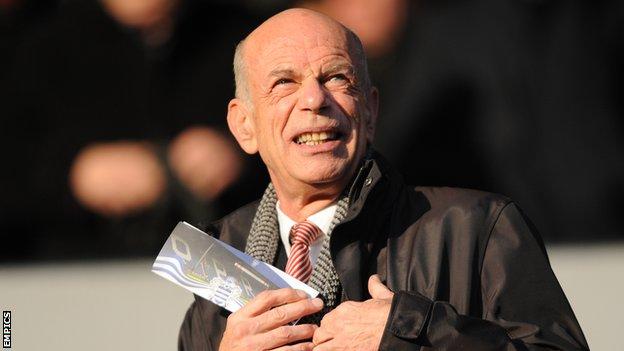 Charlton will reap the benefits of Roland Duchatelet's takeover if they avoid relegation, according to non-executive chairman Richard Murray.

Belgian businessman Duchatelet, who took over the Addicks last month, owns Belgian side Standard Liege and has links to several other European clubs.

"This season, the big priority is to stay up. Then, next season, let's see what benefits we get from it."

The Addicks beat QPR 1-0 on Saturday to register what was their first Championship victory since Boxing Day.

The south east London side are one point from safety but have three games in hand on the four sides directly above them.

"I think we have got the best stability for this club we have had for a long, long time," Murray said.

"It's just a matter of staying up this year and then we will reap the benefits."

Duchatelet has a network of clubs across Europe including Hungarian side Ujpest, German club Carl Zeiss Jena, and Spanish outfit AD Alcorcon.

The 67-year-old intends to remain "in the background" at The Valley but Murray says he will place a large emphasis on Charlton's youth academy.

"Roland and his team are looking to do things in a smarter way than everybody else," Murray said.

"We will have access to European scouts, which most of our competitors won't.

"We are academy status two, which is quite expensive, but that is not the end of our ambitions.

"What Roland has confirmed is that is the minimum we are going to have.

"We are trying to enhance our academy operation and to offer the chance to have a year or six months abroad is another selling point."