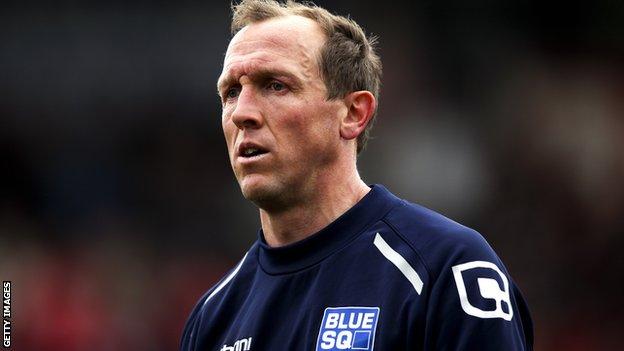 Andy Morrell could not have asked for a better managerial apprenticeship than the two and a half years he served at Wrexham.

Not many managers will encounter in a career what Morrell experienced during his brief time in charge at the Racecourse.

Club ownership issues, FA Cup runs, an FA Trophy final win at Wembley as well as the pain of a play-off final defeat marked an eventful time for the 39-year-old.

Billy Barr, Morrell's assistant and now caretaker, describes him as a "Wrexham hero" who will be remembered for a long time.

Morrell's desire to lead Wrexham back into the Football League could be traced back to the start of his very own professional career.

Plying his trade with non-league Newcastle Blue Star, Morrell earned himself a trial with the then Division Two club and impressed enough to earn his first professional deal in 1998.

It was not until his fifth season at the Racecourse that Morrell came to prominence, establishing a strike partnership with Lee Trundle and scoring 34 goals in Wrexham's promotion winning 2002/2003 campaign.

That earned him a summer move to Coventry City and he had further spells at Blackpool and Bury before returning to Wrexham in the summer of 2010.

Doncaster-born but raised in Leicestershire, Morrell was handed the manager's job on a caretaker basis in September 2011 following Dean Saunders' departure to Doncaster Rovers.

He took charge of a club which during the preceding months had encountered financial difficulties and was in the middle of a long drawn-out takeover.

Delays over the Supporters' Trust's proposed takeover of the club stalled the process to appoint Morrell full-time, much to his frustration.

He also had to contend with questions about Wrexham's very existence as much as about transfer targets and injury news.

But he did so in a calm and cool manner, belying the fact that he was a rookie manager and still a key member of the first team.

Morrell was made permanent manager after winning seven of his nine games in temporary charge and the Trust's takeover was finally ratified in December 2011.

Things were now looking up for the club after the turbulent events of the previous summer in which players' wages had not been paid.

They reached the third round of the FA Cup, knocking out Brentford during a run which secured much-needed funds to help reduce the club's debts.

Championship side Brighton were held to a draw before an impressive performance, in which Morrell himself scored, ended in a penalty shoot-out defeat at a packed Racecourse.

However, a return to the Football League was the priority and Wrexham were among the Conference's leading contenders to gain promotion.

They achieved a club record haul of 98 points, a total which in any other season would have secured promotion.

But they were beaten to the sole automatic spot by big-spending Fleetwood Town and further disappointment followed with defeat to Luton Town in the play-offs.

But Morrell and Wrexham dusted themselves off for another promotion bid the following season.

Finding it hard to compete with some of the Conference Premier's big spenders, Morrell gave young players their chance during his time in charge.

Joe Clarke, Johnny Hunt and Steve Tomassen were among the players to benefit from Morrell's youth policy while young striker Bradley Reid earned a move to Wolves.

Wrexham were once again promotion front-runners, but also chasing success on another front.

A successful FA Trophy run saw Wrexham reach Wembley for the first time in their history, with over 18,000 fans overcoming treacherous travel conditions to get to the final.

Morrell's side dominated against Grimsby Town but needed a penalty shoot-out to beat their Conference Premier opponents to pen another famous entry in the club's history.

But their bid for automatic promotion faltered during the closing weeks, and they had to settle with the play-offs for a third successive season.

Kidderminster were beaten over two-legs as Morrell's men secured their second Wembley appearance in six weeks and a play-off final against Welsh rivals Newport County.

However, there was no to be no fairy tale end to Wrexham's season as two late goals saw Newport County secure victory and a place in the Football League.

Morrell's final season in charge would be a tale of frustration.

Injuries and inconsistency hampered Wrexham's promotion hopes and by the time he stepped down from his role following a 1-0 home defeat to Barnet, the Dragons were 10 points off the play-offs.

Despite defeat in his final game, Morrell is the only manager in the club's history to have won over half his matches in charge, with the lowest loss percentage of any Wrexham manager. But those statistics tell only part of the story.

Morrell, backed by the Trust, helped to galvanise the club and restore pride following a difficult period in its history

He might well have been denied in his ambition of leading the north Wales club back to the Football League, but his place in Wrexham's history will be assured nonetheless.