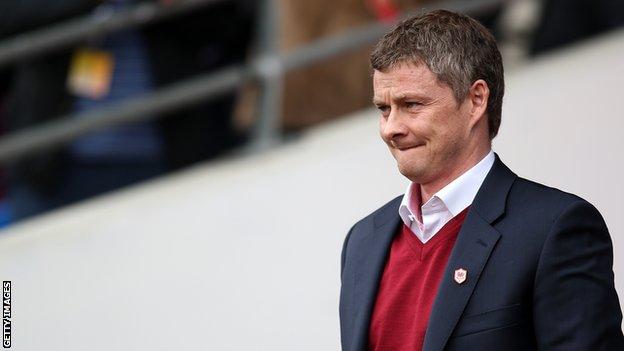 Solskjaer, who replaced Malky Mackay in January, will be a better manager for the experience according to Coleman.

"Ole will be hurting now and he'll be soul searching," Coleman said.

"Out of everybody - the players, the staff and the chairman - Ole Gunnar Solskjaer will be hurting the most and he'll be the one searching the most.

"But he'll come through it and it will make him better."

Since replacing Mackay, the Norwegian has won only one of seven Premier League matches, and admits the fight to maintain Cardiff's top-flight status is the biggest test of his career.

Solskjaer says Cardiff now need five wins from their last 11 matches to survive after Saturday's home defeat against Hull left them second from bottom of the Premier League table and three points off safety.

The former Manchester United striker shelved plans to take his players for warm-weather training in Abu Dhabi following defeat to Steve Bruce's side.

The Bluebirds were due to fly out to on Sunday but Solskjaer wants his players to stay in Wales and prepare for next Sunday's Premier League trip to Tottenham.

Cardiff are among six of the Premier League's bottom 10 clubs that have changed managers during the current campaign.

Coleman says Cardiff should resist doing what his old club Fulham have done by changing their manager for a second time this season.

The Wales manager cited the example of West Ham, who stuck with manager Sam Allardyce despite a difficult spell earlier in the season.

"Look at the stats, they're not great for clubs who change like that," Coleman said.

"Fair play to West Ham, I look at them now and think they've done the right thing. They've stuck by their manager."