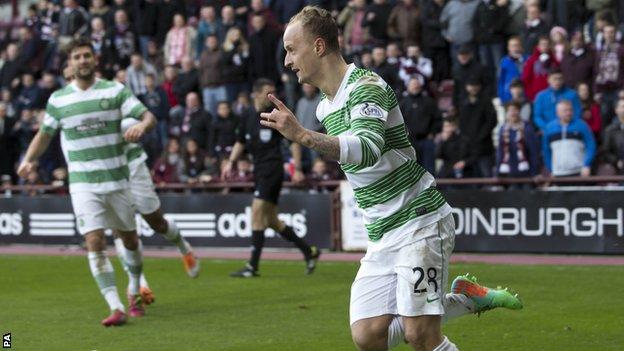 Celtic manager Neil Lennon expects striker Leigh Griffiths to embark on a goalscoring spree after netting his first goal for the club.

The 23-year-old scored in the win at Hearts on Saturday - his first goal since his January move from Wolves.

"He's settled in fine," said Lennon. "Getting the goal will have given him a huge psychological lift.

"We like his movement and his intelligence and I think there is more to come from him."

Griffiths netted 28 times in his final season with Hibs before returning to Wolves and Lennon expects him to score more goals in Scotland's top flight.

"He has been brought here to score goals and there is an expectation on him now," said the Celtic boss.

"He's playing for the biggest club he's had in his career now but he's adapted to it very well and the players around him have made the transition easier for him.

"It will be a weight off his shoulders to get that goal so early in his time here. He's a goalscorer and if you look at his finish, it was a typical Leigh Griffiths finish.

"He strikes the ball with so little back-lift but with a lot of power and unerring accuracy."