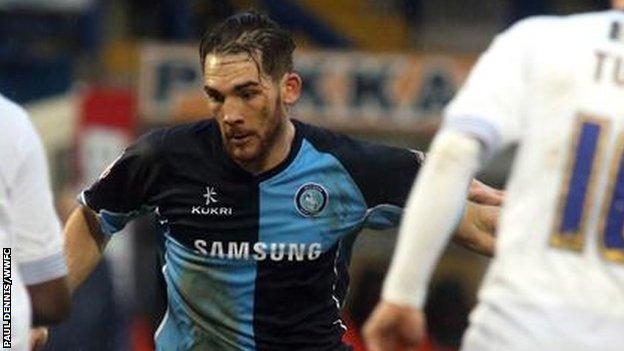 Wycombe Wanderers and Gibraltar striker Reece Styche "was dancing around the living room" after learning he will face Germany in Euro 2016 qualifying.

Gibraltar will face Germany, Republic of Ireland, Poland, Scotland and Georgia in the qualifying campaign.

They were initially drawn to face Spain, but were switched to avoid exacerbating political tensions.

"When we got moved to Germany's group I was dancing around the living room," Styche told BBC Three Counties Radio.

"I was saying to my partner I would love England, but also Germany."

Gibraltar will take part in qualifying for the first time after being accepted as a Uefa member in May.

Styche's grandmother was born in the British Overseas Territory, but now lives in Germany after her husband was stationed there with the British Army 30 years ago.

The 24-year-old former plumber was called up to the Gibraltar squad last month and could make his debut against either Faroe Islands on Saturday or Estonia on Wednesday week.

Gibraltar will play their home qualifiers for Euro 2016 at the Estadio Algarve in Portugal and start their campaign against Poland on 7 September.

Styche was playing non-league football with Forest Green Rovers until earlier this year, when he joined League Two strugglers Wycombe on loan with a view to a permanent move.

"It tops off a nice start to the year," he said.

"Last year was not the best with injuries and stuff but 2014 has started well with my move to Wycombe, the Gibraltar call-up and now the Euro draw.

"I hope I play. There's five strikers in the squad, so you'd like to think you'll get some game time."

The Sutton Coldfield-born forward added that confirming his Gibraltar eligibility was not a straightforward process.

"I had to send my nan's birth certificate off, which was quite difficult to get as she doesn't live in this country," he added.

"It was a long process but thankfully it was a successful one."