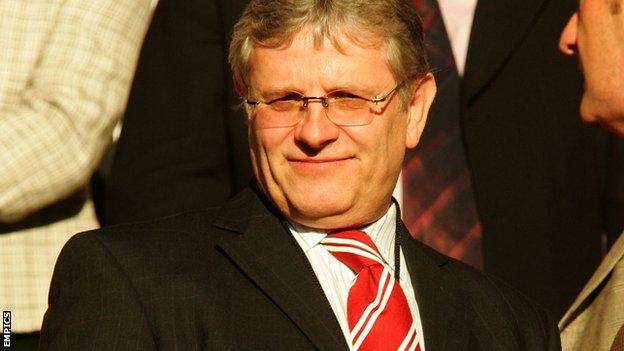 Michael Wilde is no longer in talks to buy Tranmere - a deal that would have seen former Chelsea defender Albert Ferrer installed as head coach.

Rovers chairman Peter Johnson has been in discussions with a number of interested parties, including ex-Southampton chairman Wilde.

In a statement, Wirral-born property developer Wilde said the pair had been "unable to conclude an agreement".

The 43-year-old, who represented Spain in two World Cups, previously had a short spell in charge of Dutch club Vitesse Arnhem.

Ferrer, who also played for Barcelona, featured more than 100 times in five seasons as a player at Chelsea and has also worked as a television pundit.

Wilde, a Tranmere supporter, said: "Following recent speculation in the media that I was interested in acquiring Tranmere Rovers, I feel that now is the right time to clarify the situation.

"Alongside my excellent bid team, which included Jeremy Butler and Albert Ferrer, I have worked extremely hard over the past six months trying to negotiate a deal with the Tranmere Rovers board."

He continued: "I had exciting plans in place, including the appointment of Albert as head coach, aimed at creating a new and successful culture at Prenton Park.

I had exciting plans in place, including the appointment of Albert as head coach, aimed at creating a new and successful culture at Prenton Park

"Unfortunately, however, following long and protracted talks with Peter Johnson, and despite agreement in respect of many areas, we have been unable to conclude a final agreement.

"Consequently, and after much consideration, I have now decided to withdraw from the process and I wish Tranmere Rovers every success in the future."

Johnson, who has been involved with Tranmere since 1987, has appealed for fresh investment in the club for several years. He has said he would be prepared to sell his controlling stake to a suitable new owner.

The Tranmere Rovers Trust - a supporters' group - are also known to be among the interested parties.

John McMahon is currently in caretaker charge of the first team at Prenton Park, with Ronnie Moore suspended pending the outcome of a Football Association inquiry into an alleged breach of betting rules.