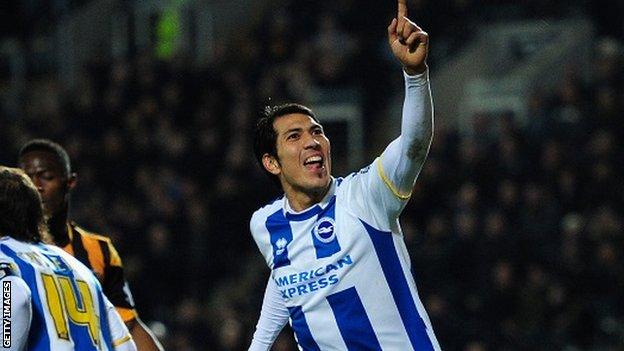 Brighton defender Stephen Ward says the Seagulls need to take the pressure off in-form striker Leonardo Ulloa with goals from other areas.

Ward told BBC Sussex: "Leo can't stop scoring and we need to wrap him in cotton wool until the weekend and make sure he's OK.

"We just need to take a bit of the weight off his shoulders."

Ulloa's run began in the 1-0 win against Doncaster on 8 February and he has scored in every game since.

"Leo's a real asset to us and the way he's playing he's back to his best," said Ward.

"We do need to pitch in and start scoring from other areas, but it's not through a lack of trying.

"We're creating chances and testing goalkeepers. He just seems to be the one who's able to put the ball in the back of the net.

"That's what good strikers do, we just need to take a bit of the weight off his shoulders."

Ward said the Seagulls should take the confidence gained from their strong second-half performance at Hull into their forthcoming league programme.

He continued: "Overall, the matches against Hull have been great for us. To run a good Premier League side so close in two games is good for our confidence.

"We gave ourselves a bit of a mountain to climb with our performance in the first half, but credit to Hull, they started really well - and perhaps we'd surprised them in the first tie at our place, so they were ready.

"But in the second half we were outstanding and unlucky not to force the game into extra-time, so we're disappointed, though at least we gave our fans something to cheer, it was a long journey for them.

"They've been great games for us, to run a good Premier League side so close in two games is good for our confidence."