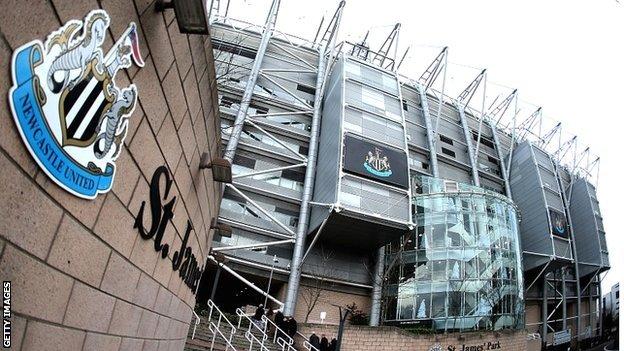 Newcastle said "player trading" was one reason for a 600% increase in profits after tax in the year to June 2013.

It says £28.7m spent on six senior players in 2012-13 was countered by profits from selling the likes of Leon Best,Fraser Forster and Demba Ba.

It added it had made "positive progress in line with Uefa's stringent financial fair play regulations".

Some supporters have criticised the club's failure to make any permanent senior signings since June 2013.

Strikers Luuk de Jong and Loic Remy on loan from Borussia Monchengladbach and QPR respectively, have been the only additions to manager Alan Pardew's first-team squad in that time, with France international Yohan Cabaye sold to Paris St-Germain for £19m in January.

Joe Kinnear, who claimed to be overseeing player recruitment, resigned less than eight months into a three-year contract as the club's director of football shortly after Cabaye's departure.

The club said that while its total wage bill fell from £64.1m to £61.7m between 2011-12 and 2012-13, six new arrivals in the latter campaign - Mathieu Debuchy,Yoan Gouffran,Massadio Haïdara,Moussa Sissoko,Mapou Yanga-Mbiwa and Kevin Mbabu - were signed mid-season.

Uefa's financial fair play regulations (FFP) restrict clubs from spending more than they earn and can be enforced with a ban from European club competitions.

Match-day turnover also increased but media turnover "related to the club's success in the Premier League and Uefa Europa League" was down.

It also added: "While Newcastle United's use of its overdraft facility stood at £4.5m on 30th June 2013 - up from just £0.3m - the club's debt remains static in the form of a £129m interest-free loan from owner Mike Ashley."

Reacting to the figures, the club's board said: "Complying with FFP continues to be a key influence on strategy and something we have been working hard at over a number of years.

"Everyone at this club wants to finish as high up the Barclays Premier League table as they possibly can.

"If the club can sustain itself as a 'top 10' team year-on-year with a stable structure and the right finances, it gives itself every chance of pushing even further.

"We remain absolutely committed to growing the club in a responsible and sustainable way."