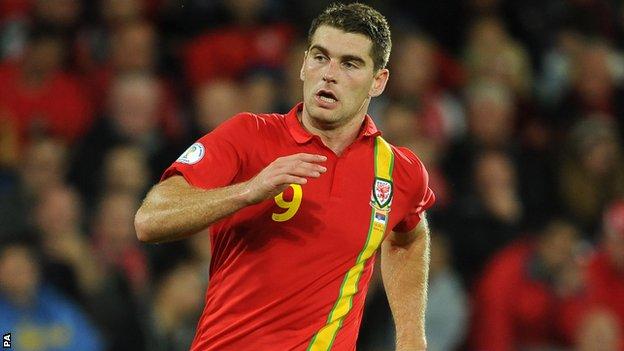 Sam Ricketts believes Sam Vokes is the man to lead Wales' attack in the Euro 2016 qualifiers.

Vokes has been in outstanding form for Burnley this season and is the Championship's third top-scorer with 17 goals.

Lack of goals has been Wales' problem but Wolves captain Ricketts says Vokes should start up-front.

"Hopefully he can be that goal scorer that we've been searching for," he said.

"He's got a very good goal scoring record for Wales for the games he's played.

"This season he's high up on the goal scoring charts in the Championship and I think now's the time to blood him."

Defender Ricketts and Vokes have both been included in Chris Coleman's squad for the friendly against Iceland in Cardiff on 5 March.

Vokes has scored five goals in 30 games for Wales since his debut against Iceland in May 2008 but most of his appearances have come off the bench.

It's good to have a presence up there, who can win his fair share of balls in the air and hold the ball up for his team

He sealed a permanent move to Burnley in July 2012 but managed only five goals during his first season with the club.

But Burnley manager Sean Dyche has described the improvement made by Vokes this season as "miraculous."

Wales' forward options have been further weakened by Craig Bellamy's international retirement and Millwall's Steve Morison is out of favour.

Former Wales striker Malcolm Allen acknowledges the centre-forward position has posed problems for the national side during recent years.

The ex-Newcastle United player believes Vokes should be given his chance but he should adopt a more ruthless streak.

"But I'm a believer if he's scoring goals and he's full of confidence he deserves his chance.

"Sam has always struck me as a nice guy and a nice guy on the football pitch.

"Sometimes when you're six foot three you've got to be a little bit nastier to get the crowd on your side and get the players on your side.

"It's good to have a presence up there, who can win his fair share of balls in the air and hold the ball up for his team.

"His first touch has improved this season but that comes with confidence."