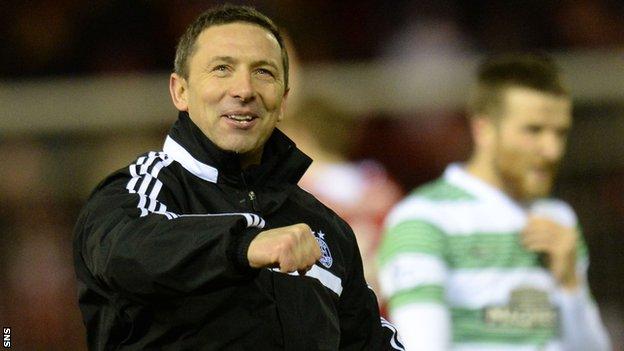 Derek McInnes hailed his Aberdeen side after at Pittodrie.

Virgil Van Dijk was sent early on and the Dons took advantage with goals from Jonny Hayes and Adam Rooney.

"We deserved that," McInnes told BBC Scotland. "We we wanted to do it with a wee bit more style in the second half, but I've been in the game a long time.

"Anytime you get a victory against Celtic you've got to savour it because its never easy."

Van Dijk was given his marching orders when he caught Peter Pawlett late on the edge of the Aberdeen penalty area.

Hayes bulleted the home side ahead with a left-footed shot that flew into the top corner, and Rooney's header from Niall McGinn's cross made it 2-0 before the break.

James Forrest pulled one back for Celtic, who dominated possession in the second-half despite the one-man deficit, but the Dons held on to inflict a first league defeat of the season on the Scottish Premiership leaders.

"Obviously them going down to 10 men made it more difficult for them, but it's never easy against 10 men and I think you've got to credit Celtic.

"Although they had a lot of possession - they got one goal for it - they never really created too much after that.

"For whatever reason we never really got a grip of the second half, but I'm not complaining. We've won a game against good opposition."

The Dons boss also praised the home support, with just under 17,000 witnessing Aberdeen beat Celtic for the second time in a matter of weeks, the earlier win coming in the Scottish Cup.

"Magic," he said. "I know they were more nervous than they wanted to be in the second half because we all wanted the same thing. But, I think the players deserve so much credit.

"We've been on the road a long time now for the last five weeks and done a lot of travelling.

"There was a few heavy legs out there, but they had enough about them to get the result for the club and we're delighted with that."