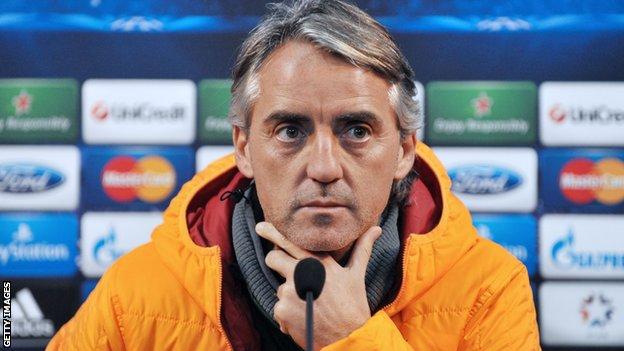 Galatasaray manager Roberto Mancini believes Chelsea have "an 80% chance" of beating his side to advance into the Champions League quarter-finals.

The Premier League leaders visit the Turkish champions on Wednesday for the first leg of their last-16 tie.

Ex-Manchester City boss Mancini insists Chelsea, who have won the Champions League and Europa League in the past two seasons, are strong favourites.

"They have fantastic players used to playing games like this," he said.

Chelsea are aiming to maintain their 100% record against Galatasaray, having won their two previous competitive games against the Turks. Both ties were in the Champions League group stages in the 1999-2000 season.

"I think they have an 80% chance of going through."

Mancini, who took charge of the Istanbul club in September, believes the Blues are capable of winning trophies this season, despite Jose Mourinho claiming his team were "too young" to challenge for major honours.

"They have really good players - these players who can change the game at any moment," added the Italian.

Mancini says ex-Chelsea striker Didier Drogba, who is facing the Blues for the first time since leaving in 2012, and Dutch midfielder Wesley Sneijder are vital to Galatasaray's hopes of reaching the last eight for the second successive season.

"Didier was an important man, an important player for Chelsea," said the Italian. "Wesley won a Champions League at Inter Milan under Mourinho.

"They have a good relationship with him, but tomorrow, for 90 minutes, I think they will be enemies.

"After 90 minutes, they can go and have a dinner together. But for 90 minutes they should play at more than 100%. We need Didier and Wesley to play very, very well."

Earlier this week, Mancini claimed some of the credit for that Champions League win - Mourinho succeeded the Italian at Inter.

But the Chelsea manager dismissed Mancini's influence in the 2010 success: "From 11 players, he didn't work with six of them. So he made a five-a-side team because I played with only five players from his team."

Wednesday's tie will not be the first reunion between Drogba and his old boss Mourinho, who signed him for the west London club from Marseille in 2004.

The Ivory Coast striker played for Galatasaray in a Champions League quarter-final tie against Mourinho's Real Madrid side last season, although the Portuguese boss admits it is still a "difficult and strange feeling" to face Drogba.

"Last year it happened the same. I want to do my job to help my team, and he tried to do his by scoring goals, which he did.

"But I admit it's a strange feeling we have to try and forget during the game."