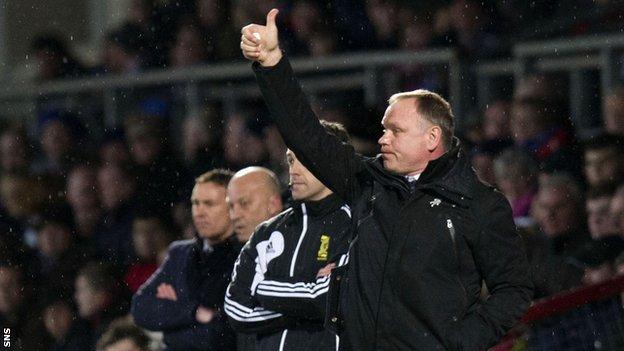 "He was absolutely outstanding; defending from the front, won every header, hold-up play - fantastic."

Hughes revealed he took the talisman off with a few minutes to go because the Irishman deserved a standing ovation all to himself.

If we were a little bit more slick, we could've scored another one or two goals

Inverness's goals came from David Raven Raven, Billy McKay and Marley Watkins in a game they controlled from start to finish.

"If we were a little bit more slick, we could've scored another one or two goals," said Hughes.

"We can play in a number of ways and tonight with the quick surface, we could just suck them in and hit them on the counter-attack.

"The shape of the team; the tactics - spot on. It gave us the platform to go and play football."

The win sends Caley Thistle clear in fourth position in the Scottish Premiership, three points behind Motherwell in third place.

Hughes' men also have a League Cup final against Aberdeen on the horizon.

"We're looking forward to it," he said. "The games can't come quick enough.

"Put any obstacle in front of these guys and they'll give it as good as they've got. I know what I'm going to get from them.

"That's why I sit cool, calm and collected nowadays in that dug-out. I can trust them."

Next up for Inverness is a trip to Celtic Park on Saturday to play Neil Lennon's side, who will be without the suspended Virgil van Dijk.

Hughes added: "It's the venue for the final and it'll give us a wee taste of it."